DELOS (DILOS) According to Greek mythology, the sacred island of Delos was the birthplace of Apollo and Artemis. Once upon a time, Delos was the political and religious center of the Aegean Sea. It was the center of the Cyclades Islands (center of the circle = Cycle). Thousands of visitors came here on pilgrimage. It was the focal point of the ancient Greek gods’ worship.
Today, Delos is an uninhabited island. It is a small flat island (3.4 square kilometers – little over 1 mi2). The highest point of the island is located in the center of the island on the hill Kythnos (altitude 115 meters/380 feet). The only inhabitants of the island are the staff and the guards of the museum and the archaeological site.

The archaeological site that covers almost the entire island has outstanding monuments: the Sanctuary of the Bulls, the Sanctuary of Apollo, the Stoa of Antigonus, the Terrace of the Lions, the Sanctuary of Artemis, the Tomb of the Two Hyperborean Maidens, the Stadium and the Gymnasium, are all impressive.
The Museum of Delos has sculptures of the Archaic, Classical, Hellenistic and Roman periods, together with a collection of vases from various periods.

How to get to Delos?

You can visit Delos by boat, principally from Mykonos, but also from other Cycladic islands.


Delos in other languages


Delos: Where on the map is Delos located? 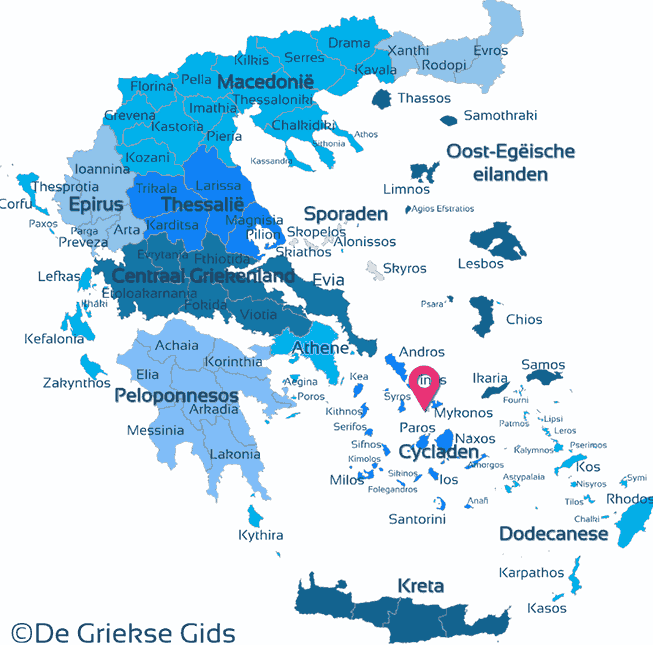 The map of Delos - ©JustGreece.com