Island of Crete. Welcome to the Crete pages of GreeceGuide.co.uk. Crete is without doubt, the most popular Greek holiday island. It is the largest Greek island and the fifth largest in the Mediterranean (after Sicily, Sardinia, Corsica and Cyprus). Crete is an elongated island with a length of 260 km (161miles) The width varies from 60 kilometers (37 miles) in the center of the island, to 12 kilometers (7 miles) from Mirambello Bay to Ierapetra town.

The island has a total area of over 8300 km2 (5157 miles). Crete is absolutely one of our favourite islands, This is because it’s where Yorgos comes from and the fact that we (Yorgos and Wendy, the creators of JustGreece.com) have lived and worked for many years on this beautiful island. We have explored every corner of the island, we have been to the remotest mountain villages, the still undiscovered beaches, the major tourist locations and the bustling ports; We have visited and admired almost all of them. What we like most about Crete is the welcoming and very friendly people. The Cretan hospitality is second to none!!! Cretans make every tourist feel at home. Because of the fact that we know Crete like no other, we can be your 'guide', sharing with you our knowledge and experiences, helping you to discover Crete on these pages, so that you can enjoy your holiday in Crete.


Where is Crete located

Crete is located in the southern Aegean Sea, 100 kilometers (62 miles) from the Peloponnese and 200 km (124 miles) from Athens. The coastline is over 1,000 km (621 miles), in other words, there is sea everywhere. On Crete about 600,000 permanent residents live, which indicates that Crete is not that crowded. In the summer months, hundreds of thousands of tourists visit the island, most of them stay on the north coast in the major resorts such as Hersonissos, Rethymnon, Chania and Agios Nikolaos. Many people think that Crete is too crowded with mass tourism, but nothing is further from the truth. Crete is large but there are quiet places to be found. Thus Crete is ideal for everyone, young people find their entertainment on the north coast and people who seek peace find that on the south coast or in one of the many authentic mountain villages that the island has to offer. Boaters, sunbathers, divers, snorkelers, hikers, surfers, campers, sailors, luxury seekers come to Crete to enjoy  what they like best. Crete consists of four departments (prefectures). From west to east are the departments: Chania, Rethymnon, Heraklion and Lassithi.

The 4 departments of Crete

Crete is divided into four departments (also called prefectures), from west to East are the departments of Chania (Chania town capital), Rethymnon (capital Rethymnon town), Heraklion (Heraklion capital city) and Lassithi (capital Agios Nikolaos). They all have their own identity and charm, each with their own beautiful nature,  fantastic climate, picturesque traditional villages, beautiful coasts and beaches and an incomparable cultural richness.

The beaches of Crete

Greece is blessed with many beautiful sandy and pebble beaches. On the internet you can find many pictures of great beaches all over Greece. Most of the beaches are, however, on Crete, logical given the size of the island. Some of the most beautiful beaches in Greece can be found here, on Crete, such as Elafonisi, Balos, Seitan Limania and Vai.

The mountains of Crete

Crete is a mountainous island, there are four mountain ranges: Lefka Ori (Greeks call these mountains Madares, these are located in western Crete ), Ida (Idi or Psiloritis,in Central Crete), Dikti (Lassithi, on the mountains of Central Eastern Crete) and the Asterousia mountains in the South of the Central and eastern part of the island. The highest peak of Crete is located on Ida at 2456 metres (1526 miles), followed by the 2452 metres (1523 miles) high top 'Pachnes' on Lefka Ori. The mountains of Lefka Ori (which literally means White Mountains) are the largest in terms of size. As striking as all these mountains,are also the many impressive caves (Dikteon Andron, Melidoni, Omalos, Sentoni) and the gorges (Samaria, Imbros etc). On Crete there are also several mountain plateaus like Lassithi, Nida (Ida) and Omalos (Lefka Ori).

The plains of Crete

Rivers and Lakes of Crete

On Crete there are no large rivers but there are a number of smaller rivers, some of these are completely dry in the summer. Because the island is narrow and very mountainous, there is no room for the nature to form large rivers. However, in the winter months, when there are heavy rains or it snows in the mountains, then sometimes, large water streams flow with violent force to the sea. The most important rivers on Crete are Geropotamos and Anapodaris on the Messara plain (in the South of Heraklion), Tiflos and Kolenis on the plain at Chania, Rethymnon and Department in the South of the Kourtaliotis Patelis at Sitia (Eastern Crete). There are also no big lakes  on Crete. The most famous Lake on Crete is the Lake of Kournas, near the seaside resort of Georgioupolis and the Lake at Zaros (South of the Ida mountains). There are also some artificial lakes formed by the construction of dams.

The cultural heritage of Crete is unbeatable. The history of Crete is incredibly rich and goes back to thousands of years BC. For example, the Minoan civilization was the first European civilization and ' Europe ' (= Evropi) was in Greek mythology the lover of Zeus. Knossos and Festos (Phaestos or Phaistos) are among the oldest, most historic places, not only of Greece and Europe, but of the entire world!

The roads on Crete

The roads on Crete are good. The national road (Ethniki Odos) is located on the North coast of the island and connects Kissamos (West of Chania City) with Sitia (in the East). This road is 300 kilometers long. At various places, throughout the length of this road, there are junctions where roads connect the North with the South. These roads are relatively good, some are wider than others. These roads can be very twisty causing you extra time to reach your destination.

Food and drinks on Crete

Crete is actually a very rich island because it can be self-sufficient, actually almost nothing has to be imported. Olives and grapes, tomatoes and cucumbers, bananas and melons, honey or figs, Crete has it all! The tasty produce you can get here,  are not available anywhere  else! The Cretan diet is well known, as are the healthy food habits of the Cretan people. On Crete there are all kinds of ancient traditional products, which you can find at the bakery or the wholesaler. There are special cheeses which you will only find in Crete, high quality wines, olive oil of excellent quality and of course the traditional ' Raki ', the strong drink that is produced in Crete.Also unique are the Cretan specialities which appear in different seasons or during religious or traditional festivals.

Music and dance on Crete

Traditions are well preserved on Crete including the musical and dancing traditions. Anyone who has been on holiday to Crete will have heard Cretan music on the radio or at a Cretan musical night. Cretan music is dominated by two instruments, which are the ' LYRA and LAOUTO '. The ' Lyra' is a string instrument with three strings that already existed in the Byzantine period, in the tenth century. The ' Laouto ' (= lute) is a stringed instrument that looks like a guitar and usually accompanies the ' lyra'. The Cretan music is very popular, even outside of Crete and even among the younger generations. This music is accompanied by dance, the most famous dances are the ' Pentozalis ', the ' Chaniotikos ' or ' the Maleviziotis ',  the 'Syrtos’ and the 'Sousta '.

How to get to Crete

On Crete you will arrive initially by plane. The two airports of Crete, Heraklion and Chania, are very popular, there are direct (charter) flights to both airports from airports across Europe. But Crete is also accessible by boat from various Islands or via the Greek mainland. In addition, there are major cruise lines that organize cruises in the Mediterranean and also stop at Crete.

On Crete there are numerous hiking and mountain trails. The European walking path E4 runs through Crete. It starts at Trachilos (West of Kissamos) and ends in Kato Zakros in the East of Crete.

Crete is also known for its many gorges that you can walk. The best known is of course the Samaria Gorge. Other impressive gorges where you as a hiker will have a lot of fun are:

Crete in other languages


Crete: Where on the map is Crete located? 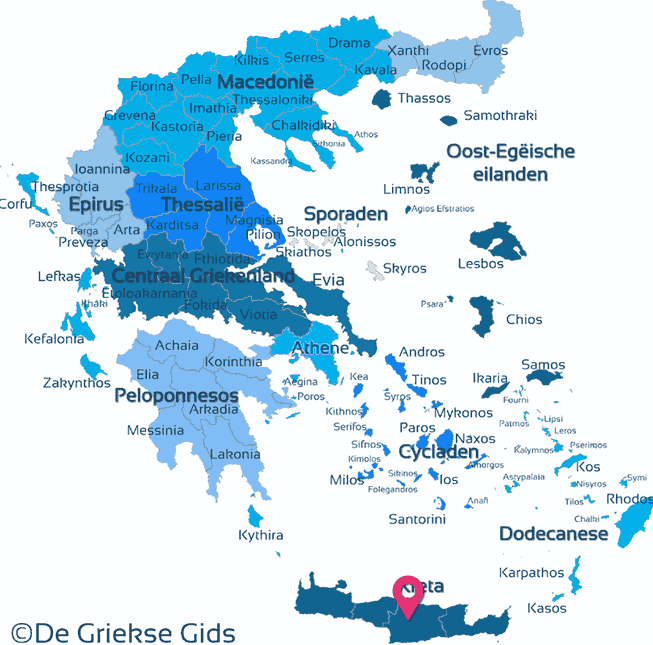 The map of Crete (©JustGreece.com)