Central Greece. Central Greece, called by the Greeks Sterea Ellada, is a large geographical area which, as the name says, is centrally located in Greece. The surface of the Sterea Ellada is approximately 25 000 sq. kilometres. To Central Greece belong the departments of Attica, Euboea(island), Viotia, Fthiotida, Fokida, Aetoloakarnania and Evrytania.

The prefecture Evrytania is considered an ideal destination for a winter vacation; the mountainous area of breathtaking natural beauty. It is densely wooded and water richest area of Greece. It is often called "Switzerland" of Greece. Karpenissi is the capital of the prefecture and is situated at the foot of Mount Timfristos at an altitude of 960 m. The clear atmosphere, the dry healthy climate, sycamore (platanus), chestnut and pine trees make Karpenissi an ideal place for summer and winter vacations. The churches of Agia Triada and Gorgianades and Kefalovrisso are places you have to visit.

The prefecture Aetoloakarnania in western Central Greece combines the beauty of the sea with those of the mountains. The capital of the prefecture is Messolonghi (244 km from Athens)
The small island is Aetoliko located 13 km northwest of Messolonghi and is connected to the mainland by a stone bridge. Approximately 50 km northwest of Messolonghi is Astakos, a picturesque market town on the Gulf of the same name. The beautiful unspoiled modes with fine white sand and the sea with every shade of blue at Agios Yorgis, Asprogiali and Vela make the area perfect for a quiet carefree holiday.

This region is both in summer and winter, suitable to go. The sea of Evoikos (Euboean sea) and Korinthiakos (Gulf of Corinth), the ski center at Parnassos, the wealth of archaeological sites at Orchomenos, Chaironia, Plataea and Thebes are a guarantee to hold your attention.

Green prefecture Fokida, filled with olive groves and small beaches, each year attracts numerous tourists. The capital and commercial center of the prefecture is Amfissa (200 km from Athens). The largest flow of tourists is attracted by Delphi and the famous Oracle of Apollo on the slopes of Mount Parnassos.

Livadia (135 km from Athens) is the capital of the prefecture. There is a dry Mediterranean climate. Livadia is the capital of the prefecture (135 km from Athens) and was built between two hills of a gorge through which flow the springs of Erkina. Thebes (Thiva - 87 km from Athens) built in a fertile lowland area's archaeological seen very interesting. According to tradition, Thebes was founded by King Cadmus. Thebes (Thiva), was also the birthplace of Hercules. You can visit the archaeological museum, the Mycenaean tombs, the ruins of temples.

Euboea in other languages is also called Evia, in modern Greek it is pronounced Evvia. Northern Evia is very green and Southern Evia is rather on the bare side. There are two ways to get on Evia, by car or by several ferries from Rafina, Oropos, Arkitsa or Glyfa. If you go by car from Athens than follow the "National Road" (Ethniki) to Halkida and the bridge over there.

The map of Central Greece - Map of Sterea Ellada


Central Greece in other languages 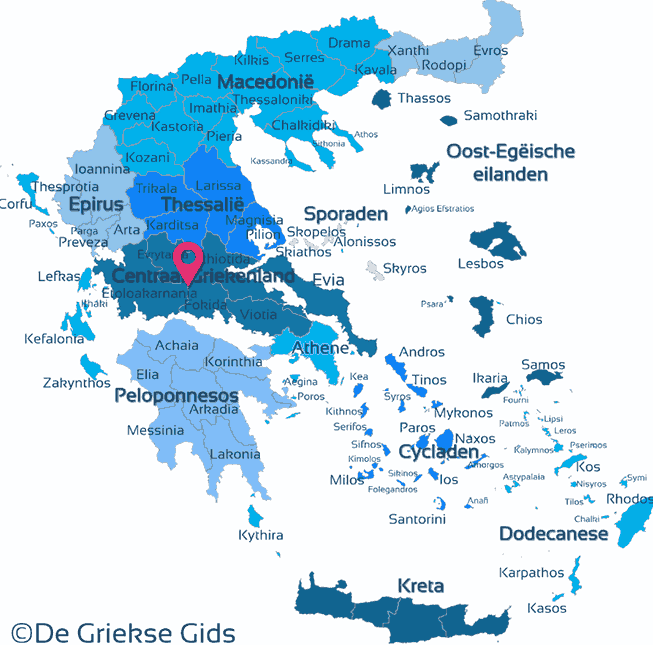 The map of Central Greece (©JustGreece.com)