Peloponnese. The Peloponnese (Peloponnesos) is a large peninsula southwest of Athens. The district Peloponnese consists of seven prefectures, these are: Achaia, Argolida, Arkadia, Ilia (Elias), Corinthia, Lakonia and Messenia. The Peloponnese offers a wide variety of nature and culture. You can find rugged mountains, lush valleys and the plains, there are fantastic coastal towns and there are also a lot of sites of antiquity.

The Peloponnese is separated in the north from the mainland by the impressive Corinth Canal. The Peloponnese peninsula is a mountainous area with many ravines, rugged cliffs, fertile plains, green valleys and beautiful forests. The untouched nature and quiet beaches, great climate, the ancient villages and archaeological sites make this area popular for tourists. The friendliness and hospitality of the population in this area is heart-warming. The area is also very suitable for touring.

The numerous excavations and ancient buildings are evidence of the long and interesting history of the Peloponnese. Especially Mycenae with the remains of the rich Mycenaean civilization, the site of Ancient Olympia and the Byzantine city of Mystras are worth a visit. In the summer months you can visit the ancient theatre of Epidaurus for an evening performance This ancient theatre is admired for its exceptional acoustics. You can visit the city of Sparta, in ancient times this was the great rival of Athens. The ruins of the ancient city are close to Mystras. Ancient Corinth was also a very important city. The ruins of the old town are close to the modern city of Corinth. The sanctuary of Hera, a goddess from Greek mythology, is located in Argos. The city of Patras in the north of the Peloponnese is an important port, with a ferry connection with, among others, the Ionian Islands and Italy (Ancona and Venice) Also at Patra is the new toll bridge crossing the Gulf of Corinth, to Central Greece (Sterea Ellada). 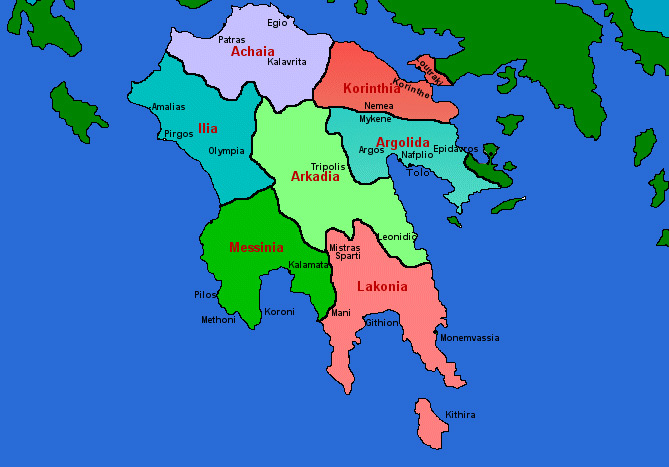 The map of Peloponnese

The most famous historical sites of the Peloponnese

Peloponnese is generally a very mountainous peninsula, and especially the eastern and central part of the district are very mountainous. The highest mountains are Taygetos (2407 meters), Ziria (2376 meters), Chelmos (2341 meters), Erymanthos (2224 meters) and Panachaikon (2224 meters). The largest plain of Peloponnese is located in the department of Elia. Other larger plains are the plains of Argos (Corinthia Department) and the departments of Achaia, Messinia and Lakonia (at Sparta). The largest plateau is that of the Arkadia department, at Tripolis.

The rivers and lakes of Peloponnese

In the Peloponnese larger and smaller rivers flow and there are several lakes. There are not only streams above the surface but also underground streams. Especially in the areas of Arkadia and Mani (Central South Peloponnese), which is borne by the lime that is abundant here. The largest rivers are Alfios and Evrotas. Other rivers are Pinios, Ladon and Pamisos. The great lakes in Peloponnese are Stymfalia in the department of Corinthia (600 meters above sea level) and Lake Taka, in the Arkadia department (650 meters above sea level). In addition, there are a number of lagoons, the most famous lagoon is that of Kotichi (at the woods of Strofilia in the departments of Achaia and Elia) and the Lagoon of Moustou (Arkadia). In the Peloponnese there are also some beautiful waterfalls such as the Pollimnio Falls and amazing caves such as the Diros cave in Mani.

The beaches of Peloponnese

The roads of Peloponnese

The roads of the Peloponnese are generally very good. There are several motorways and very good provincial roads. We travelled from Athens to Kalamata in less than 2.5 hours and the Athens-Patras route in less than two hours. In some areas the roads are very winding.

Skiing in the Peloponnese

Did you know that you can ski on the Peloponnese? Really! At Xylokastro and Kalavrita there are ski slopes. For example, on the mountains of Ziria, the villages are Ano Trikala, Mesa Trikala and Kato Trikala. Here, it is comparable to Austria or Swityzerland. In Ziria you will find the ski center of Ziria where you can ski in winter. The same goes for the mountains at Kalavrita.

How is Peloponnese accessible from Western Europe?

The Peloponnese is reachable by plane or boat. From Italy, for example, there is a direct boat link with the port of Patras. There are two international airports, one at Kalamata and one at Araxos (at Patras). Many tourists fly to Athens and then go by car or bus or train to the Peloponnese.

Peloponnese in other languages


Peloponnese: Where on the map is Peloponnese located? 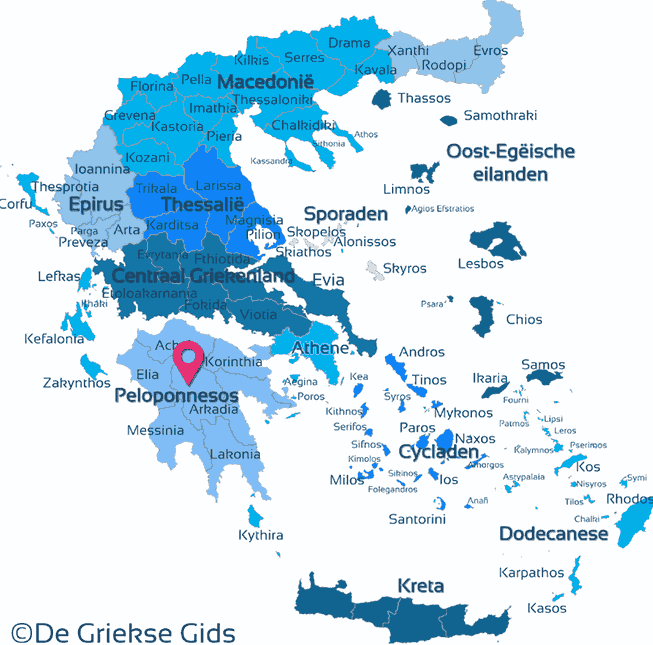 The map of Peloponnese (©JustGreece.com)