Thessaly. Thessaly is a Geographical region in Greece. In ancient times, Thessaly was known as Aeolia. It consists of the prefectures of Larissa, Magnesia, Trikala and Karditsa. The total area of Thessaly is 14 000 sq. kilometers. It borders on the north with the region of Macedonia, on the south with the region of Central Greece, on the west with Epirus, while on the east with the Aegean Sea. Administratively, the Sporades islands belong to the Thessaly region.

In Thessaly there is a large fertile plain mainly surrounded by mountains and bordered to the east by the Aegean Sea. The area has a continental climate, with large differences in temperature, in the summer it is very hot and in the winter it can freeze. The main river of Thessaly is the Pinios river, which flows to the sea through the wonderful Tempi valley.

Capital of the region is Larissa City. Larissa and Volos are the two largest cities. Thessaly is bordered all around by high mountains: The Olympus mountain in the north (border prefecture Macedonia), in the west there is the Pindos mountain that forms a border with Epirus, in the south Parnassos mountain (border Central Greece) and in the east, there is mountain Ossa and mountain Pelion which form a natural barrier against the sea.

In Thessaly many prehistoric finds have been made in Sesklo and Dimini. The main cities were in the ancient Trikke (now Trikala) Pharsalus (now Farsala), Larissa and Pherai (now Velestino). The geographical isolation and the rivalry between the ruling families were the main reasons for the low impact of the Thessalians on Greek history. Thessaly is traditionally one of the most important agricultural areas of Greece, with for cultivation of corn, rice, tobacco, olives, vegetables and (citrus) fruit. There is enough space left for cattle and, since ancient times, horse breeding. The industry is concentrated mainly around Volos (Port) and Larissa.

Karditsa:
- Karditsa town where the Pafsilipos Park is located. Visit the central square of the town and have a look at the Neoclassical Pallas-building there. Visit also the impressive building of the municipal market.
- The Plastiras lake, 25 kilometres west of Karditsa town.
- The mountainous resort of Mouzaki
- The Acheloos river
- The mountain range of Agrafa and Smokovo


Trikala:
- Trikala town, the beautiful capital of the prefecture, built on the ancient Trikke.
- The asclepeion of ancient Triki, the oldest and most important of Greece according to Strabo
- The traditional preserved Varousi neighborhood
- The Justinianus fort north of the town
- The grove of Profitis Ilias
- The impressive monasteries of Meteora


Larissa:
- Larissa city and the park of Alcazar
- The many important monuments of ancient, Byzantine and Ottoman period. Most are located on the hill of the Fortress
- The Hippocrates tomb
- The Pinios river and the beautiful Tempi area
- The mountains Olympos and Ossa
- The towns of Elassona, Farsala and Tyrnavos

Magnesia:
- The city of Volos
- The villages on Pelion mountain
- The beautiful beaches
- The traditional fishing villages in the Pagasetic Gulf
- The ski resorts of Pelion

The Map of Thessaly 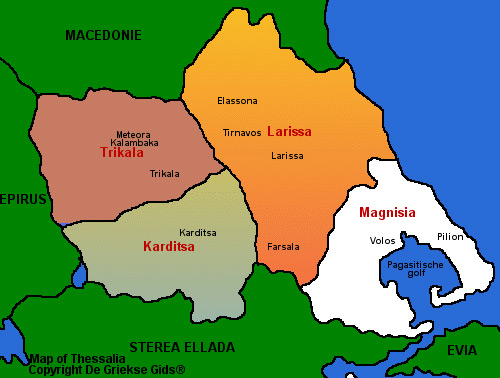 
Thessaly in other languages


Thessaly: Where on the map is Thessaly located? 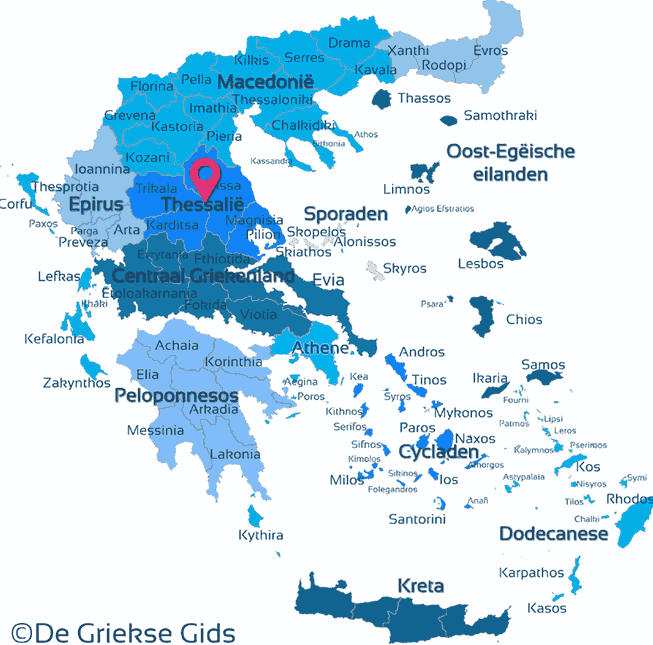 The map of Thessaly (©JustGreece.com)