The prefecture is mainly mountainous, the highest mountains are the mountains of Ziria (highest peak 2341 meters). The plains of the prefecture are mainly around the city of Corinth, near the Corinth Canal and near Loutraki, the rest of the island is mainly mountainous. The only lake on the Corinthian prefecture of Peloponnese is Stymfalis (Stymfalia), but there is one more lake , the lake of Vouliagmeni on the part of Corinth in Central Greece.

Corinthia belongs to the most fertile prefectures but also economically developed prefectures of Greece. The economy is based on agriculture, industry, crafts, the processing of agricultural products but also on the tourism industry.

Major agricultural areas are the narrow coastal belt, the valleys of the prefecture, the plains near Feneos, Stymfalia and Nemea. Livestock production is developed mainly in mountainous and hilly areas.

Since ancient times it was aware of the economic importance of a rapid transit between the Corinthian and the Saronic Sea, but it did not achieve a real attempt to dig a canal under the rule of Roman emperor Nero. Read more»

Of the ancient Nemea is not much: three pillars of the temple of Zeus, some foundations, and 500 meters down the old stadium. Here the Hellenic Nemean games were held in honour of a local hero. Nemea is located in an area where the soil is dry, but very suitable for growing grapes. Read more»

The historic town - "Thermae" - today called Loutraki. It lies on the north side of the Corinthian Gulf and passes to the foot of the Gerania Mountains with a beautiful beach of four kilometers. Read more»

The Apollo Temple and the Temple of Octavia its magnificent ruins of ancient Corinth.
The Akrokrinth, the 575m. high mountain together with an impressive fortress is worth a look. The first walls date from antiquity, and the Byzantines, Franks, Venetians and Turks, they again expanded and strengthened.


Corinthia in other languages


Corinthia: Where on the map is Corinthia located? 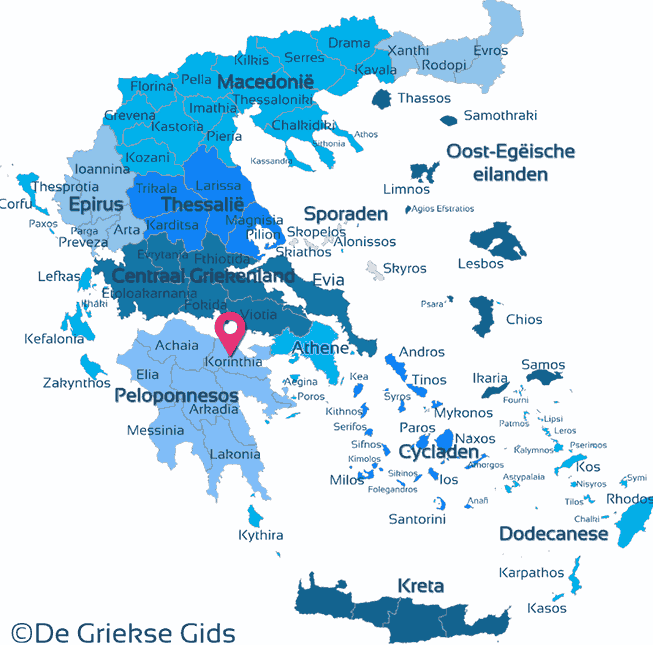 The map of Corinthia - ©JustGreece.com