Kilkis. Kilkis is a Greek prefecture in northern Greece in the district of Macedonia. It lies north of Thessaloniki and is bordered on the north by the Former Yugoslav Republic of Macedonia (FYROM). The capital of the prefecture is the town of Kilkis.

Kilkis town has about 25,000 inhabitants and is located about 50 kilometers (30 mi) from Thessaloniki. Most residents of the town and the prefecture are farmers and peasants, but recently a lot of industry has moved into the in the area, in Stavrochori.

On the slopes of this hill is also the cave of Agios Georgios; one of the most extraordinary caves in Greece. The cave is 1,000 square meters (11,000 sq. ft.). In the caves you’ll observe fossils and bones of many animals such as hyenas, horses and deer.

The countryside around the city is very beautiful and from the hill you have an excellent view over the city and across the plain to the mountains. About 45 kilometers (28 mi) west of Kilkis lies Goumenissa, a picturesque town at the foot of the Paiko Mountains. Goumenissa is not only known for its beautiful alleys and traditional houses but also because of the production of fine wines and the famous tsipouro. In this area, delicious apples and cherries are grown.

Six kilometers (less than four mi) away is the village Evropos where archaeological excavations can be seen. Here, the only Macedonian Kouros is found. It is currently housed in the Archaeological Museum of Kilkis for your viewing.

In Palio Gynekokastro, fifteen kilometers (9 mi) northwest of Kilkis town, are the ruins of a castle that was built in the Byzantine period (1328) by built by Emperor Andronikos III, on top of a hill 200 meters (650 ft) high. This castle served as a lookout over the rivers Axios and Gallikos.

In the north of the prefecture and on the border with FYROM, lies Lake Doirani with its beautiful scenery. The lake is 43 square kilometers (16.5 sq mi), and is located mostly in the former Yugoslav Republic of Macedonia. In the summer people from the region come here seeking cool weather and one can indeed swim at this lake. At the lake are several sandy beaches. Nearby are several small idyllic villages. In the village of Doirani, with its many fish tavernas, you can enjoy carp, trout, eel, perch and crayfish.

In the west of the prefecture, at the Paikos Mountains, at an altitude of 1,500 meters (almost 5,000 feet), are bushy slopes, flowing water and small picturesque villages such as the villages of Griva, Livadia and Kastaneri. In the northwest of Kilkis, at 520 meters (170 ft) altitude on Mount Paiko, lies the village of Skra known for a battle that took place here during the 1st World War and was won by the Greeks against the Bulgarians. About 15,000 Greek soldiers took part in this war. In Skra is a war memorial in honor of the 605 Greeks who died here.

Flights arrive daily from Athens (30 minutes flight) into the airport of Thessaloniki, 60 kilometers (37 mi) from the city of Kilkis. There are direct (charters) flights from several European cities as well as scheduled flights.

Kilkis in other languages


Kilkis: Where on the map is Kilkis located? 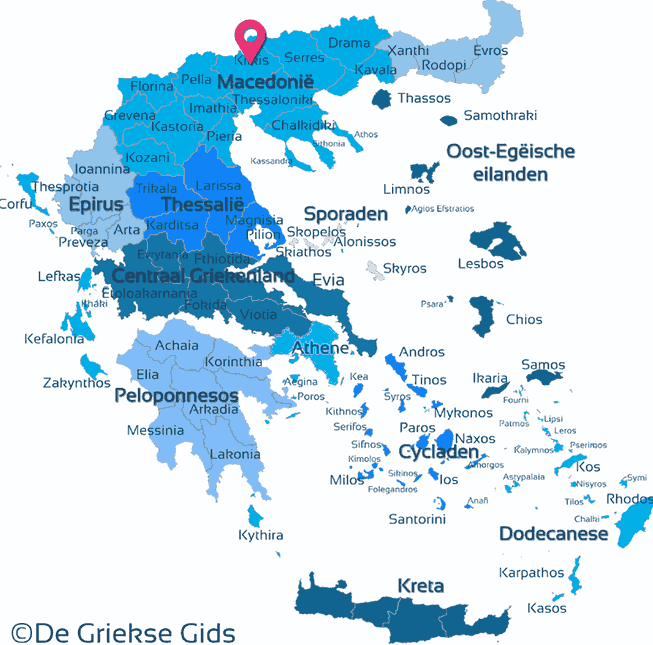 The map of Kilkis - Â©JustGreece.com