Batsi. Batsi is the most touristic resort on the Greek island of Andros. It is located seven kilometers (4 mi) southeast of the port city of Gavrio and twenty-five kilometers (15.5 mi) west of the capital of Andros, Chora. Batsi is situated in a bay with a large, sandy, pebble beach and is surrounded by lots of green. The village has a cosmopolitan character, and there are many nice traditional taverns and ouzeries. The nightlife here is the best on the island. We visited Batsi in April, the tourist season had yet to begin and it was still very quiet, but during summer it is vibrant and busy.

Batsi was originally a fishing village but in recent decades has developed tourism. At the small fishing harbor you see both fishing boats and yachts. In Batsi there are many hotels and apartments to rent. Batsi has a beautiful beach, but also outside Batsi you will find nice quiet beaches such as Chrissi Ammos beach north of the town, about three kilometers (nearly 2 mi) away. Some lovely, quiet beaches are south of Batsi. From Batsi, which today has about 1,000 permanent residents, you can make all kinds of day trips in the area. The monastery of Zoodochou Pigi and the traditional villages of Katakilos and Arni, where mills and water can be seen, are worth a visit.

Batsi in other languages


Andros: Where on the map is Batsi located? 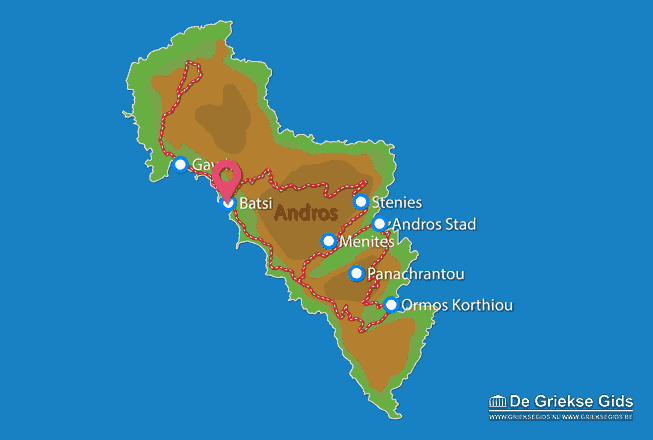 The map of Andros (©JustGreece.com)