Chora, Patmos. Chora is the capital of the Greek island of Patmos. It is a traditional village with white houses, narrow cobbled alleys and courtyards. The inner gardens are surrounded by high walls, which are connected to each other and thus form a kind of fortification around the village.

Above the village, on top of the hill stands the castle of Patmos, built with natural brown stone. Located here, the famous monastery of Aghios Ioannis o Theologos (St. John the Theologian) attracts thousands of worshipers and is one of the most religious places in Greece.

In and around Chora, however, are more churches dating from the 15th to the 17th century. Every year Easter is celebrated exuberantly. On the road from Chora to Skala you’ll pass the Apocalypse Cave where St. John wrote the Book of Revelation.

In the village there are rooms for rent and hotels, as well as numerous restaurants and cafeterias.

Chora Patmos in other languages


Patmos: Where on the map is Chora Patmos located? 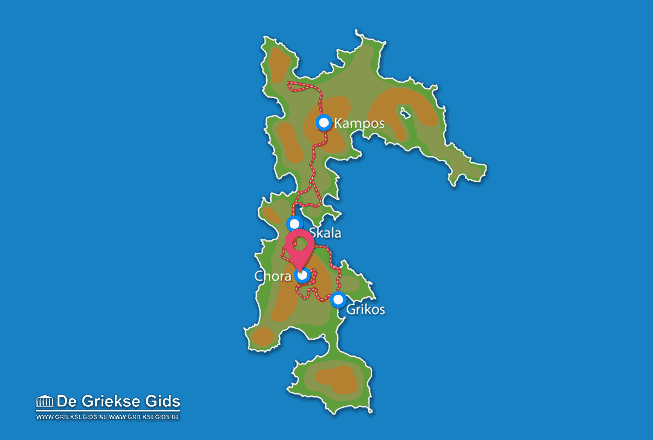 The map of Patmos (©JustGreece.com)