METEORA. Meteora is one of the most outstanding monuments of the world, protected by UNESCO, and the most important in Thessaly. It is the most notable monastic centre of Greece, after the Holy Mount Athos.

In the 11th century, the first hermits came to the peaks of the imposing rocks and built the "Skiti" of Doupiani. In the 14th century, St. Athanasios Meteoritis formed the first organized monastic community on the rock of Megalo (big) Meteoro. Twenty-four monasteries have spread over the rocks since then, in more than 600 years.

Today only the monasteries Megalo Meteoro, Varlaam, Agia Triada, Agios Stefanos and Agios Nikolaos Anapafsas Rousanou exist and are still in use. Every day visitors from around the world come together to meditate and pray. They learn the lifestyle of the monks, admire the indescribable nature, the artistic architecture and study the historical relics. The area is characterized by the monasteries built on high rocky pillars. By centuries of wind and water erosion (the Plain of Thessaly was once an inland sea), the rock formations have received their specific appearance. From the 9th century, the natural sandstone towers were climbed by hermits. They created their own environment and only occasionally came down.

From the 11th century onwards various areas expelled monks to this area. In the mid-14th century the first monasteries rose on the peaks. In 1336, the monk Athanasios from Mount Athos, on the Great Meteoron, the highest (623 m/2044 feet) and most important monastery was founded here. Twenty-three other monasteries would follow. With nets, ropes and wooden ladders up to 40 meters in length the monks transported needed goods and people upstairs. In its heyday, there was an autonomous community of 24 monks and monasteries in almost complete isolation from the rest of the world. Since 1490 the abbot of the Great Meteoron was also the head of the entire monastic community of Meteora. In the 17th century, however, the decline of monasticism in Meteora began. In the 18th century the monasteries were used as a refuge for the Greeks who wanted to evade taxes imposed by the Turkish rulers. During the 19th century the Meteora monasteries were used to escape advancing rebels, and during the Second World War and the Civil War (1945-1949), the then remaining monasteries suffered much damage.

After all these centuries of violence, there are only six monasteries left in reasonable condition, some of which are still inhabited by monks and nuns. Since 1988 the Meteora World Heritage expended a great deal off effort to restore the monasteries in their original glory.

Meteora in other languages


Trikala: Where on the map is Meteora located? 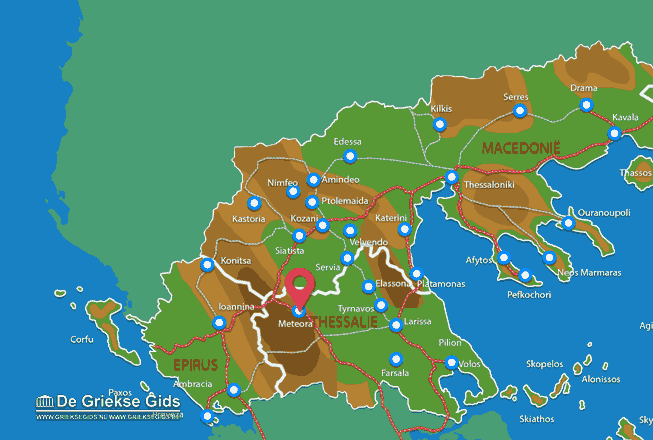 The map of Trikala (©JustGreece.com)