Siatista. One of the most traditional towns in the prefecture of Kozani and throughout western Macedonia, is Siatista. Siatista is located in the western part of the prefecture, 30 kilometers (19 mi) southwest of Kozani city. You could use this town as a base to fully explore the region because this town is quite central.

Siatista lies on the slopes of Mount Siniatsiko at 920 meters (3200 ft) altitude. From the 17th to the 19th century Siatista experienced a prosperity that is clearly recognizable by the mansions that are everywhere. In the town are also several beautiful churches, such as the big church of Agios Dimitrios, which was built in 1911. The oldest church is the church of Agia Paraskevi, built in 1677 at Gerania square.

The districts Chora and Gerania are the most picturesque parts of Siatista. Here you’ll find the most beautiful mansions, built in the 18th century. There are also interesting museums such as the Paleontological Museum and the Botanical Museum.

Siatista in other languages


Kozani: Where on the map is Siatista located? 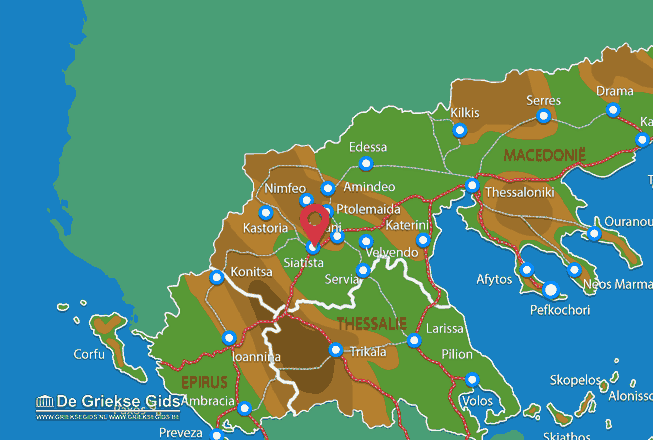 The map of Kozani (©JustGreece.com)