Vergina is a historic town 95 kilometers (59 mi) west of Thessaloniki in the Greek district of Macedonia. It lies in a hilly area in the Imathia Prefecture, 12 kilometers (7.5 mi) from Veria, the capital.

In 1977, Vergina was widely recognized in world news when Professor Manolis Andronikos discovered a number of tombs here. In one of these tombs was buried Philip the 2nd, father of Alexander the Great. His son Alexander the 4th is also buried here and his wife Roxani too.

In the tombs all kinds of gold objects were found. The golden urn bearing the symbol of the Macedonian dynasty (star with 16 rays) is very famous and the golden wreaths of oak leaves and the golden armor are impressive. We recommend you visit the impressive museum.

The name Vergina was given to the village in the 1930s when Greek refugees from Turkey settled here. Vergina was actually the name of a queen who lived here before the fall of the Byzantine Empire and the rise of the Ottoman Empire.

The actual name of this place in ancient times was Aiges. Aiges was the first capital of the Macedonian kingdom, the kingdom of one of the most famous Greeks, Alexander the Great.

Vergina in other languages


Imathia: Where on the map is Vergina located? 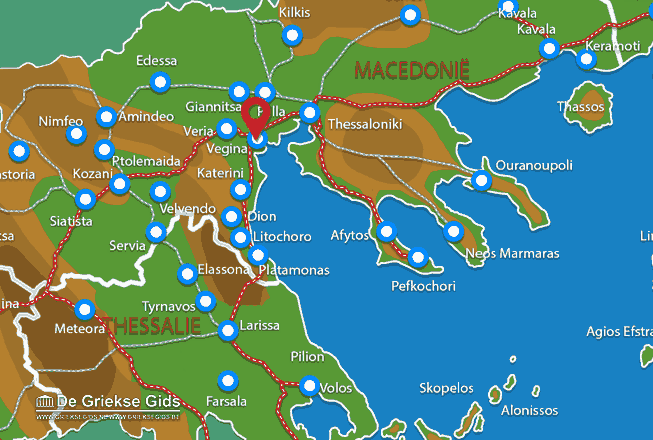 The map of Imathia (©JustGreece.com)