Aspous on the Greek island of Skyros is a nice seaside village that lies on the route of the port Linari to Skyros town. The distance to Skyros town is only four kilometers. The village lies on the sand-pebble beach at the Bay of Mealos. Part of the village is built on the slopes of a hill.

Aspous is located at a short distance from the small bay of Achilli. Here the Greek hero Achilles would have stationed its ships before he went to Troy to participate in the Trojan War. In Achili  the marina of Skyros is located. Here you will see a lot of fishing boats and in the clear, blue sea you can have a nice swim. The beaches of Aspous and Achilli are quiet beaches, you will not find crowds of tourists here, but also no sun beds and umbrellas. There are a number of tavernas where you can eat well. In Aspous there are all kinds of rooms and apartments for rent.

Aspous is a traditional Greek village which got its name from two rivers, called Asopoi and culminated here. It is one of the most beautiful villages of Skyros, because the beautiful white houses stand out against the green mountains and blue sea. The village is idyllic and the surrounding view is very nice.


Skyros: Where on the map is Aspous located? 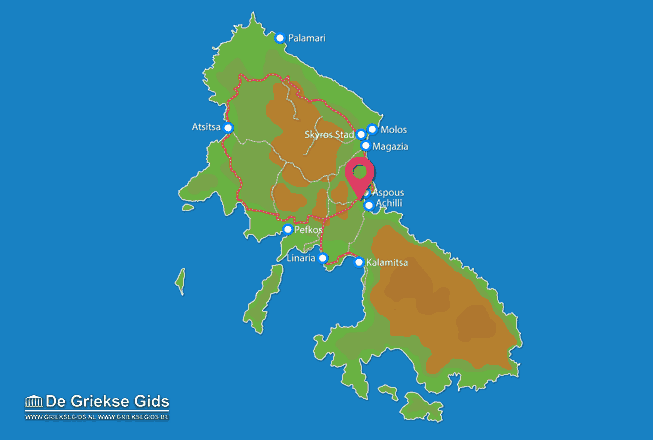