Skyros town. Skyros town or Chora, on the greek island of Skyros, is situated at the foot and on the slopes of a rocky hill. At the top of the hill the famous Byzantine monastery of Agios Georgios castle is located. This castle was built by the Byzantine emperors Nikiforos Fokas and Ioannis Tsimiski in the Middle Ages. From the castle you have an excellent view across the coastal villages Molos and Magazia and the blue Aegean Sea.

Skyros Town is located in the northeast of the island and resembles a Cycladic island. The whole area around the castle was inhabited since ancient times. The white houses that were built next to each other formed a natural protection against pirate attacks. It is really worthwhile walking through the narrow streets, with many shops, bars, restaurants and small churches.

In the village one can admire various crafts that are still being carried out in small traditional shops. The inhabitants of Skyros have always been good woodworkers and cabinet makers and still are. That is still to be seen, if you get the chance to enter a traditional house of Skyros, note the woodwork of the furniture. Also there are many souvenir shops and tourist shops.

One of the most popular places in Chora is the Square of Poets. This square is dedicated to the British poet Rupert Brooke, there is a statue to confirm this. The square also houses the Archaeological Museum of Skyros and the Museum of Manos Faltaits.

Skyros town in other languages


Skyros: Where on the map is Skyros town located? 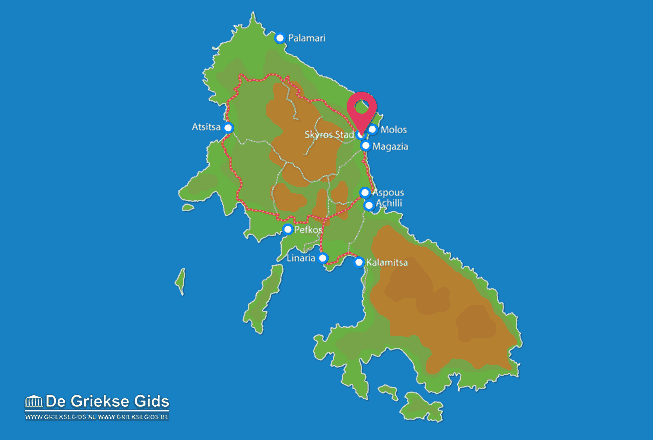