Drios. The village of Drios is located 25 kilometers (15.5 mi) southeast of Parikia on Paros island. It is a picturesque fishing village surrounded by a fertile environment. In recent decades Drios has turned its attention to tourism. The picturesque harbor is home to many fishing boats, as well as several restaurants and cafes. We chose Taverna Markakis, where we enjoyed the seafood specials.

On the seabed lie archeological remains, which means that the sea level has risen over the years. In Pirgaki are the remains of a tower dating from the Bronze Age.

If you want to stay in Drios, there are plenty of hotels, apartments and rooms or studios for rent. Near the village are all sorts of nice beaches, such as the beaches Pirgaki, Lolantoni and Bountari. Every year, there is a traditional folk festival on May 8th in honor of St. John the Theologian.

Annual international windsurfing competitions are held in Drios. The Meltemi wind that blows in the summer is ideal for such tournaments.

Drios in other languages


Paros: Where on the map is Drios located? 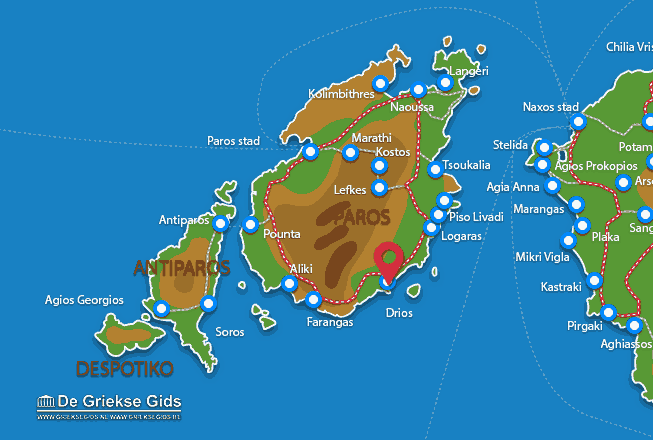