Molos. Molos is a seaside resort in the east of the Greek island of Paros, located 17 kilometers (11 mi) from the capital Parikia and 13 kilometers (8 mi) from Naoussa, east of the village of Marmara. It is situated in a large bay. In the south of the bay is a small harbor, where fishing boats moor. Immediately behind the harbor is the church of Aghios Nikolaos. The beach of Molos is large and there are a few taverns. The rock formations behind the harbor are notable.

Near and to the south of Molos, near the church of Aghios Nikolaos, there is a dirt road lined by cedar trees. If you follow this dirt road you arrive at the beach Kalogeros, also called Kalogeras. This beautiful, long, sandy beach is surrounded by high cliffs and is mostly visited by Greeks who use the local mud and clay as a beauty treatment (mask) for body and face.

Molos is situated near the hill Kefalos, which is also referred to as Kastro tis Orias. On top of this hill is the monastery of Aghios Antonios, built in the 16th century. The unique feature of this hill is that it is an inactive volcano whose crater lies beneath the church. On the hill are also remains of the walls of a Venetian castle from the 15th century.

Molos in other languages


Paros: Where on the map is Molos located? 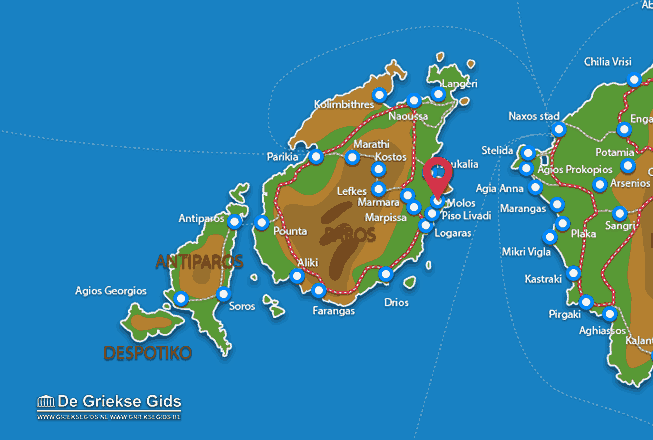