Gaios. Gaios is the capital of the island of Paxos (Paxi). Gaios is the largest and most important port of the island. It lies in a bay protected by the smaller island of Agios Nikolaos. It is located in the same bay and the even smaller island of Panagia which lies somewhat beyond. Thus it seems as if Gaios is next to a river because the distance to the island is about thirty meters. It is very nice. A stroll along the waterfront, where all sorts of boats and yachts moor is enchanting. The beautiful green hills are covered up to the water, especially with olive and pine trees.  Near the town, which is more like a village, is quaint shopping streets and squares where it is very cosy. Here are all kinds of restaurants, fish tavernas, cafes, here you get the ultimate holiday experience. In Gaios there are several hotels and apartments, but it is wise to book in advance because they are limited. Attractions here include the Church of the Holy Apostles, the small island of Agios Nikolaos where the Venetian fortress from the 15th century can be seen, the monastery on the island of Panagia and the statue of Giorgos Anemogiannis, a Greek hero who was murdered by the Ottomans in 1821 in Nafpaktos.

Gaios in other languages


Paxos: Where on the map is Gaios located? 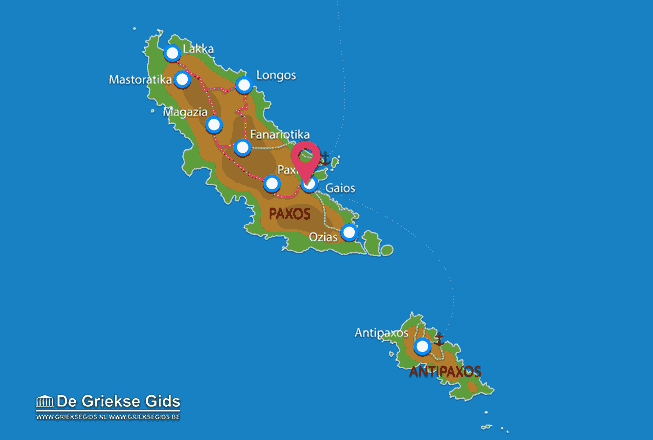 The map of Paxos (©JustGreece.com)