Karthaia. The excavations of Karthaia are located in the southeast of the island of Kea. In ancient times Karthaia was one of the four city-states of Kea and, in all likelihood, the most important of all. This city-state thrived in the Archaic period (800-480 BC) up to the pre-Byzantine period.

You cannot reach the beach by car, but you can reach it boat or by foot. A stroll along the ancient trail is beautiful and takes about 45 minutes. The whole route is paved with stones. It's exactly the same trail used by the ancient Greeks, centuries before Christ. As you travel on this walk you can easily imagine yourself in ancient times, because as you walk you see no indications of modern times. What you experience is exactly the same as the ancient Greeks did. Bring water and solid shoes on this walk. The return trip is a more difficult, uphill walk. Halfway through the route there is a water source from which flows satisfyingly cold water.

On the beach of Karthaia is the church of the Holy Mother Mary and on the top of the hill just behind the Acropolis, the Church of Panagia Mirtidiotissa.


Kea: Where on the map is Karthaia located? 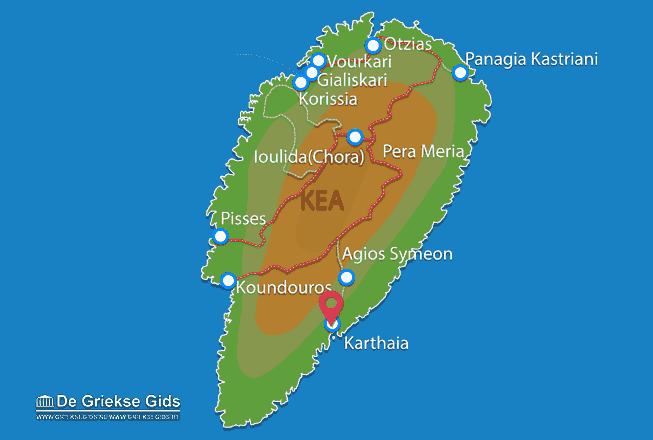