Vourkari. Vourkari is the beloved place for people who love good food and entertainment. It is the cosmopolitan center of the island of Kea. It’s a picturesque fishing village about two kilometers (just over a mile) from Korissia, the port of Kea and it is situated ten kilometers (6 mi) from the capital, Ioulida. Vourkari, which is situated in the closed bay of Aghios Nikolaos, has a small harbor for fishing boats, pleasure boats and yachts. Because the island of Kea is near Piraeus and Athens, wealthy Greeks often come here for the weekend or longer in the summer to enjoy this town and this island.

Vourkari is known for good restaurants, especially its excellent seafood restaurants. According to connoisseurs, the fish specialties are heavenly and especially with a cold glass of ouzo! Every year famous national and international personalities come to Vourkari, because it is simply very nice and cozy. Prince Charles and Princess Diana arrived by yacht many years ago, and Tom Cruise and Sharon Stone were spotted here.

The village is built amphitheatrically on the slopes of the hill. From the houses you have a beautiful view over the harbor and the long peninsula that ends at the Aghios Nikolaos lighthouse. This lighthouse was built in 1831 and was the first in the Cyclades. In 1790, at the narrowest part of the peninsula, Steno tou Lamprou Katsoni, sailor Lampros Katsonis and his men lifted his boat, with the help of tree trunks, to the other side of the peninsula. The Turks had closed the entrance to the port and this was their only means for fleeing from the Turks.

Next to the harbor, in the curve of the bay Vourkari, is the beach of Vourkari. Here, in the middle of an olive grove, stands the church of Agia Irini. This church was built on the spot occupied by a prosperous city in prehistoric times. Excavations are on display.

Every year, on June 30, the festival of Agioi Anargiroi is held in Vourkari. During this festival it is customary that one mainly consumes raw meat. Of course the festival is also known for traditional music and local wine.

Vourkari in other languages


Kea: Where on the map is Vourkari located? 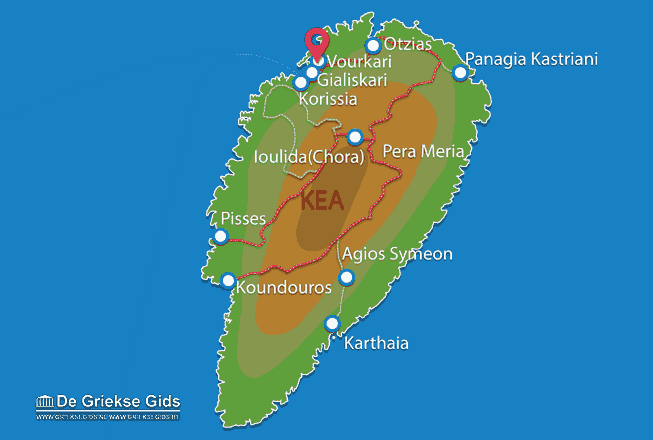