Prefecture Lassithi  is one of the four prefectures of the island of Crete. The capital of Lassithi is the town of Agios Nikolaos. Lassithi is the easternmost prefecture of Crete and is bordered to the west with the prefecture of Heraklion, in the north with the Cretan Sea and in the South with the Libyan sea. Lassithi occupies an area of 1800 sq. km that is mostly mountainous. In the west of Lassithi the Dikti Mountains are located, with their highest peak of (2148 meters). Between the mountain peaks, with an altitude of 800 meters, is the Lassithi plateau, famous for its windmills. Here is also the Dikti cave which was, according to legend the birthplace of Zeus. The port towns of Agios Nikolaos and Sitia on the north coast are very busy towns, especially in the summer. Agios Nikolaos and Elounda are the most developed tourist resorts of the prefecture. Near Elounda is the former Leper Island of Spinalonga which attracts many tourists every summer. It is accessible by boat from the cosy town of Elounda. The palm beach of Vai, the monastery of Toplou and the archaeological site of Kato Zakros are  situated on the eastern side of the island. On the south coast is Ierapetra, the southernmost city of Greece and of Europe and west of this, the very charming village of Mirtos. For a good overview of all the major sites and attractions of Lassithi, view the list on this page.

Agios Nikolaos to Rethymnon:
51 kilometers (31 miles - about one hour by car)

Agios Nikolaos to Knossos:
66 kilometers (41 miles - about one hour by car)

Lassithi Prefecture in other languages 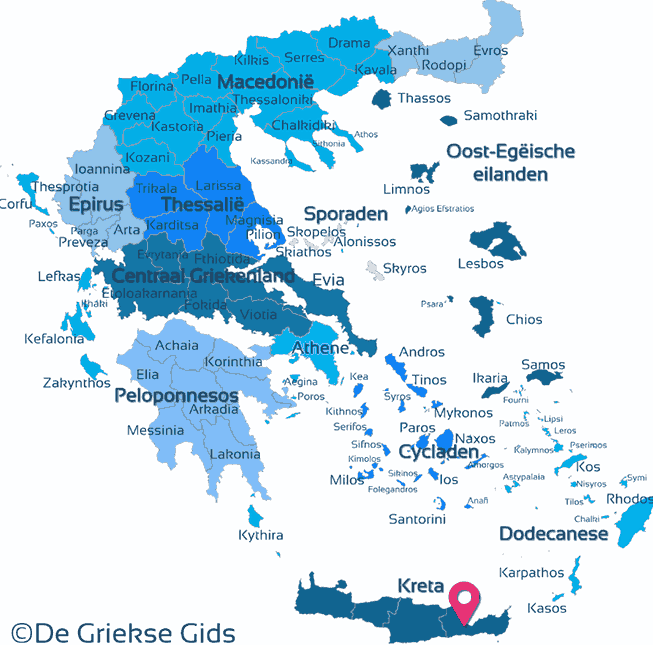 The map of Lassithi Prefecture - ©JustGreece.com