The tunnel that connects Etoloakarnania with Epirus (Preveza) is located here. This tunnel is 1500 meters (547 feet) long and is one of the most expensive works ever in Greece. Until the year 2002 you had to take the ferry from the harbor of Aktion to get to Preveza. Another option was to drive all around the Amvrakikos Gulf but given the long distance (more than 150 km/93 mi) it was not a favorable option.

The sea at Aktio is known for the fish farms. It is an area with many lagoons and lakes, it is an important water area where many species of birds come.

In ancient times Aktion was an important trading port of the ancient city of Anaktorio (Vonitsa), It was the sanctuary of the God Apollo. On the sea at Aktion in the year 31 BC. the battle of Actium (Aktion) took place when the fleet of Cleopatra fought against the fleet of Octavianus. The fleet of Cleopatra lost, and the remainder of her ships returned to Egypt.

Aktion in other languages


Aetoloakarnania: Where on the map is Aktion located? 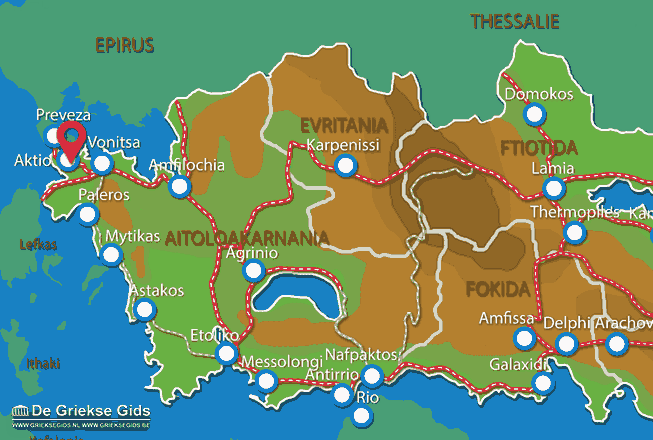