Klima. Klima is one of the striking fishing villages on the Greek island of Milos, with its little white houses built along the water. In the middle of the 19th century these houses were owned by fishermen who used them as second homes and as boathouses. The fishermen usually lived in Plaka and left their boats here along the water. On the lower floor was storage for the boat, while on the top floor was living space and a place for the fisherman to sleep. During the 20th century, however, function of the fishermen's cottages changed and became the second homes for the families of the fishermen. Today, these houses are rented to vacationers.

Klima is accessible through Plaka and Trypiti. Unfortunately parking can be difficult to find. You may have to park your car along the road, a hundred meters from the village, and walk by foot to the village. There are no beach bars or taverns. The only public place is the Hotel Panorama, which is slightly higher and a small distance away.

Between Klima and Plaka you can see catacombs, which are early Christian tombs, in the tunnels of a mountain. In total, it’s about 200 meters (650 ft) long, where 2,000 Christians from the 2nd to the 6th century are buried. Two hundred meters (650 ft) beyond the catacombs is the ancient theater of Plaka. It was built in the first century BC. Here, too, you will find some columns and other excavations of the ancient city of Milos. This is the place where the famous statue of Aphrodite of Milos (Venus of Milo) was found in 1820. The Venus of Milo is now displayed in the Louvre in Paris.

Klima in other languages


Milos: Where on the map is Klima located? 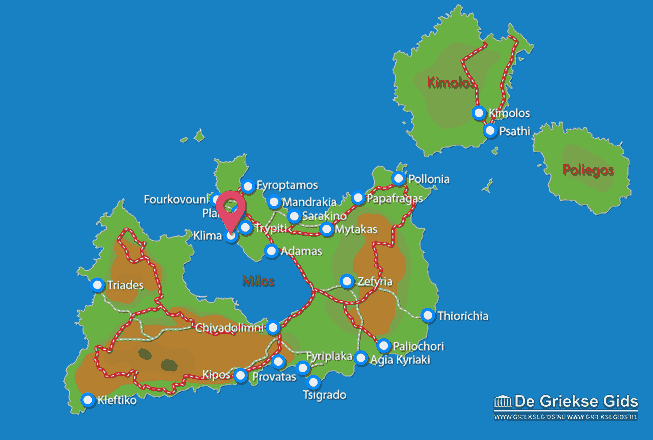 The map of Milos (©JustGreece.com)