Aegina. Aegina is an island in the middle of the Saronic gulf, 16 miles from Piraeus. Generally it is a flat island with some low mountains. It covers an area of 83 sq.km. The total coastline length is 57 km.

The capital and main port of the island is Aegina town. There are daily connections by ferryboat, catamaran, flying dolphin to Piraeus but also to the Saronic islands and the Peloponnese (Nafplion, Methana, Ermioni, Tolo, Monemvassia). Other smaller harbours are Agia Marina, Souvala and Perdika.

Aegina is an island with a rich history. From the fishing port of Perdika  small boats leave to sail to the picturesque islands of Angistri and Moni, great places to enjoy absolute tranquillity and unspoiled nature.

The island has a lot to offer like sandy beaches, beautiful fishing villages and a richly varied landscape. Aegina is well developed and the island is mainly visited by Greeks from Athens and the surroundings.

According to mythology, Aegina was named after the daughter of Asopos, who was kidnapped by Zeus. Zeus brought her to a deserted island and together they had a son named Aiakos. Aiakos later became one of the three judges in the underworld.

According to archaeological evidence, Aegina was inhabited since the Neolithic era and is considered to be the birthplace of Aristophanes. Aristophanes was a comic writer of ancient Athens who wrote thirty plays.

The most important archaeological site of Aegina is located in the east of the island near Agia Marina, where the temple of Aphaia, once the patron goddess Aegina, is located. The first temple was founded in 570 BC and destroyed sixty years later.

The temple whose remains we can admire today, was built on the same spot. Aphaia, a goddess who was not known to the Greeks, was replaced by Athena, to encourage the Greeks during the Trojan war. Scenes from that epic conflict are depicted in the temple. Therefore, the temple is also called Aphaia Athena. In the archaeological museum of Aegina, the finds are displayed.

Also the Middle Ages left their mark on Aegina. 6.5 km from the harbour, opposite the monastery of Agios Nektarios, there is a low hill covered with the ruins of the abandoned city Palaiohora. This was the capital of the island from the ninth to the early 19th century. The monastery of the Virgin Chryssoleontissa on the road to Marathon is also very interesting to visit.


Aegina in other languages


Aegina: Where on the map is Aegina located? 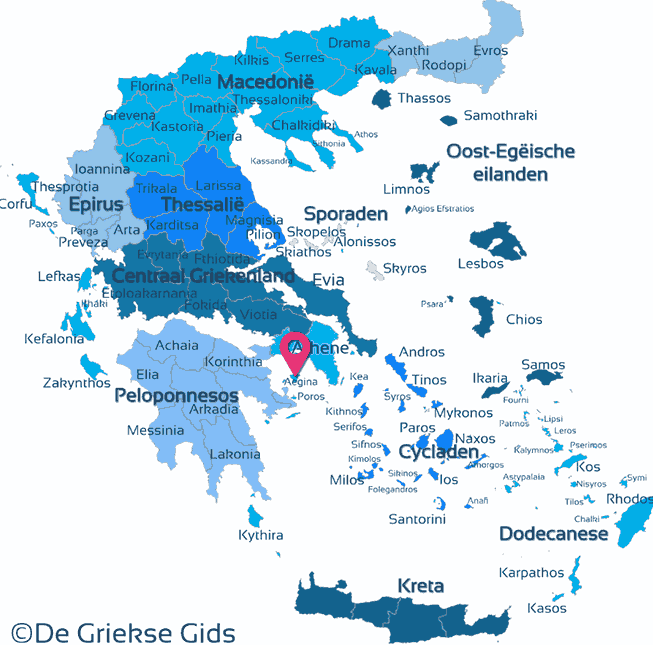 The map of Aegina - ©JustGreece.com