Tinos. Tinos is a Greek island in the Aegean Sea belonging to the Cyclades archipelago. It is a mountainous island lying south of Andros and north of Mykonos. It’s about four hours by boat from Rafina, the port east of Athens. Tinos has no airport, but there are several daily boat connections with Attica, from the ports of Rafina and Piraeus (near Athens) and other islands in the Cyclades, such as Mykonos and Syros.

Tinos is an island that is not well known among non-Greek tourists. For the Greeks, it is a popular destination for religious reasons. Tinos is home to the Church of the Holy Mother Mary. Every year thousands of devotees come here to pray. It is one of the most popular pilgrimage sites in Greece. Interestingly, while most Greeks are Greek Orthodox, approximately 35% of the inhabitants of Tinos are Greek Catholic.

In recent years, an increasing number of foreign tourists come to Tinos for several reasons. First of all they come for the traditional villages. There are over sixty villages, and all of them are very beautiful. The villages all look the same, though they are different. Churches are everywhere on Tinos. There are more than a thousand on the island! Noteworthy is that churches are often owned by private persons.

In almost all the villages you will see white houses with blue doors and windows. The narrow streets are cute and many of these alleys often run under homes, like underground tunnels. The most beautiful villages are the mountainous villages built on the slopes of hills. One of the prettiest villages is Kardiani in the northwest of Tinos. A walk through the village is an event. The whitewashed houses look cute and the view towards the spectacular bay (Bay of Kardiani) is more than impressive.

Another distinguished village is Volakas, also called Volax. It's not so much the village that will impress you, but the environment. There are literally hundreds of large round rocks scattered around – a special phenomenon! Located nearby is the dramatically steep rocky mountain of Exomvourgo. The ancient capital of Tinos was located here along with the ancient Acropolis of Tinos. A path leads to the top of the mountain where there is a large cross along with a spectacular view. Another outstanding feature on the island of Tinos are the more than 600 dovecotes (homes to doves). They're beyond simple dovecotes in that they often consist of two or three floors.

Tinos is known throughout Greece for its marble and marble techniques. Dozens of famous sculptors have come from Tinos and are among the best artists in Greece. In the village of Pyrgos in the north of the island, there is a school that educates marble workers. A visit to Pyrgos is a must, because it's like an open-air museum. The inhabitants of the village have built and adorned everything in the village (houses, churches, alleys) with marble. In the village there is a museum where marble works can be seen. A visit to the gallery and workshop of Michalis Saltamanikas is fascinating. He has a number of pieces of art that will amaze you - works of world-class caliber.

The land and the roads of Tinos

When you drive around the island, you will also notice something else. The island is mountainous and rain once flowed directly into the sea. To capture the rain, inhabitants made terraces, like narrow plains, on the slopes of the mountains and separated them from each other with stones. In this way, they captured the rainwater to create more fertile land on which farmers could work. You see these plains everywhere on the island.

The roads on Tinos are quite good and are almost all paved. From the most northern point, such as Panormos, it takes about 45 minutes by car to get to Aghios Ioannis Porto, all the way to the south. You have the choice of different roads to go and return, and it’s recommended that you do so because you will discover the rougher side of the island.

The Beaches of Tinos

On Tinos are several nice beaches: Aghios Sostis, Laouti, Agia Kyriaki, Aghios Ioannis Porto and Aghios Fokas are all located in the southwest of the island, not far from Tinos town. North of Tinos town are the beaches of Kionia, Aghios Romanos, Ormos Giannaki and Ormos Ysternia. They are all sandy beaches, some with some pebbles. There are also are beautiful beaches in the east of the island Naming them from north to south, they are the beaches of Panormos, Rochari, Kolimbithra and Livadi.

Sights and tips on Tinos island

Going out in Tinos

Tinos Town and Aghios Ioannis offer the best entertainment. You can go to the disco and to well-organized folklore evenings. Most hotels are located in the town of Tinos. There are also apartments and hostels in which to stay. There is one campground on Tinos (near Aghios Fokas).

How to get on Tinos

Tinos is connected by ferry with the ports of Piraeus

Tinos in other languages


Tinos: Where on the map is Tinos located? 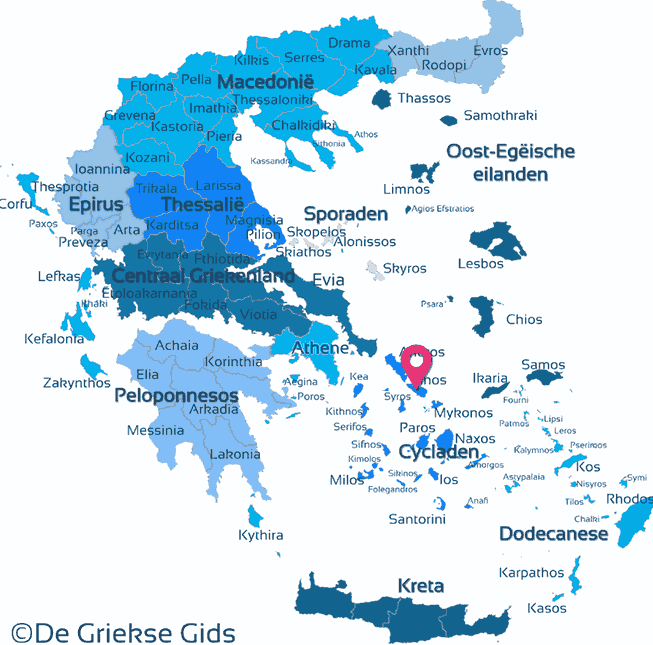 The map of Tinos - ©JustGreece.com