Kampos Tinos. Kampos on the Greek island of Tinos is a typical Cycladic village, seven kilometers (4 mi) northeast of Tinos Town. It is located on the hills of Tinos on a plateau where there is much flowing water. In the village, you immediately recognize the architecture that that is similar to other villages; whitewashed houses, narrow cobbled streets with arcades, blue doors and window frames and flowers everywhere. Lovely!

The village, which lies 330 meters (1,100 ft) above sea level, is surrounded by trees and very lush. From the village you have a beautiful view of various villages on the hills in the region and beyond to Exomvourgo. In and around the village are about 200 pigeon houses with their own distinctive style.

In Kampos is a typical windmill, the only one in operation on the island. In Myloi, just outside the village, is the chapel of Aghios Georgios, where elaborate celebrations mark each Easter.

Another nice village nearby is the village of Tarampados and little further is Loutra with the monastery of Ursilinen and a convent of the Jesuits.

Kampos in other languages


Tinos: Where on the map is Kampos located? 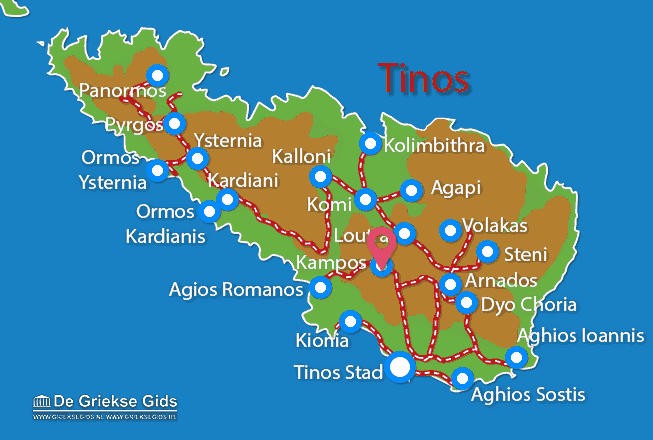