Epidaurus (Epidavros). Epidaurus is the collective name for a number of villages in Argolida, Greece. Palia Epidaurus or Archaia Epidaurus is the old port to the sea, with a theater and an early Christian church. It is a fishing village that lies on the Saronic Gulf and the east coast of the Peloponnese. The village is surrounded by orange and olive groves. Epidavros has approximately 2000 inhabitants who are mostly engaged in fishing, agriculture and tourism. There are several nice beaches in the village. There are also shops, restaurants and cafes. There are many hotels and apartments and several campsites.
Nea Epidaurus or New Epidaurus is the new village near Palia Epidaurus.

At 14 kilometres from the village of Epidavros lies the impressive outdoor theatre. It is the best preserved theatre in Greece. It dates from the fourth century BC. With a capacity of 12,000 to 14,000 seats which are still used in the summer for performances of classic dramas (Epidaurus Festival).

The most amazing thing is the great acoustics. They call it “the miracle of Epidaurus” and to the last row you can hear even the smallest sound. The theatre was designed in the middle of the fourth century BC by architect and sculptor "Polyclitus the Younger". There have been two phases of construction, this can be seen to the difference in shape of the lower and the upper rows. There were only 34 rows of seats, a century later, it again expanded by 21 rows. Thus, the number of seats increased from 6,500 to 12,300. In the middle of the orchestra, which has a diameter of about 20 meters, was formerly the altar of Dionysus. Unfortunately here is nothing more preserved. In the theatre of Epidaurus Greek dramas are staged in July and August and on Fridays and Saturdays classical performances at 21:00.

Epidavros in other languages


Argolida: Where on the map is Epidavros located? 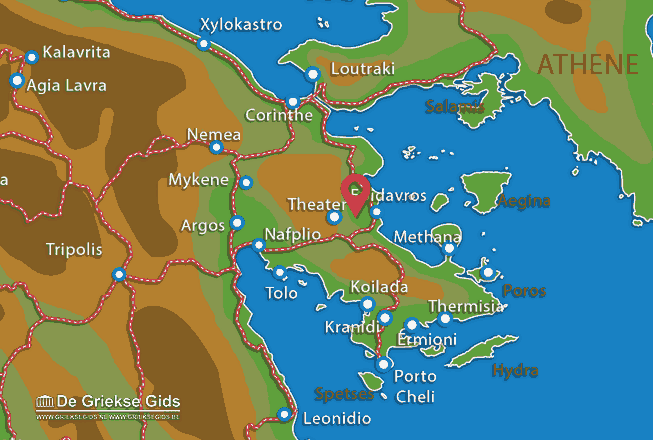