Nafplion. Nafplion is located in Argolida, Greece. It is a pleasant port town in the shade of a large rock on which is situated the Palamidi castle. It is 857 steps  (20 minutes climb) up to the Palamidi castle, but the fortress can also be reached along an easy road that leads through the new suburb of Pronia.

Close to the harbour is the fortress island Bourzi with a Venetian fortress.  The city of Nafplion is a major tourist centre, because of its cosy atmosphere and the presence of the ancient sites of Mycenae, Tiryns, Argos and Epidaurus. Nafplion is an elegant city with its marble roads and beautiful architecture.

On the Akronafplia were found the oldest traces of habitation in this region. (3000 v. Chr.) Byzantines, Franks, Venetians and Turks have switched off each other as ruler in the course of time, but the Greeks have always wanted independence. Nafplion was the first capital of liberated Greece from 1829 to 1834. In 1831 was the first president of Greece, Kapodistria assassinated in Nafplion, by two fanatical inhabitants of the Mani.

Nafplion in other languages


Argolida: Where on the map is Nafplion located? 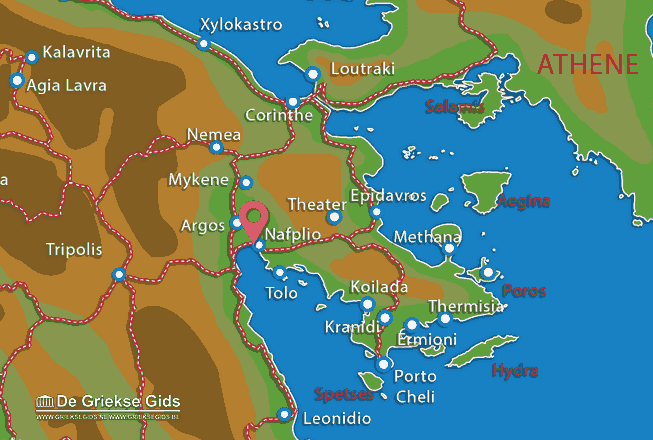