National Marine Park. Where Alonissos is also known for its National Marine Park. The National Marine Park of Alonissos is the first marine park of Greece and at the same time the largest marine protected area in Europe. The area that the park occupies is approximately 2220 square kilometers. Within that area apart from Alonissos, are the islands of Kyra Panagia, Psathoura, Piperi, Skatzoura, Gioura and twenty-two other small islands. This park was founded in 1970 and since 1986 a decision was made to protect the monk seal, the seal Monachus Monachus, in this area. The whole area is well protected from the crowds and mass tourism. Some islands may not be accessed if there is a permit needed to get there. Consequently, there are excellent conditions for endangered species to survive. Similarly, the Monachus-Monachus seal which has been given the name because of the shape of the top of it’s head that looks like the hat of a Catholic monk. Monachos in Greek monk. Today the monk seal is one of the most endangered species in Europe. These animals swam not only in the Mediterranean but also in the Black Sea and even on the Atlantic coast. Today, 500 seals are still alive and it is estimated that two thirds of them are in Greek waters. Monachus-monachus is one of the largest seal species, they may be three meters long and reach up to the age of forty.

National Marine Park in other languages


Alonissos: Where on the map is National Marine Park located? 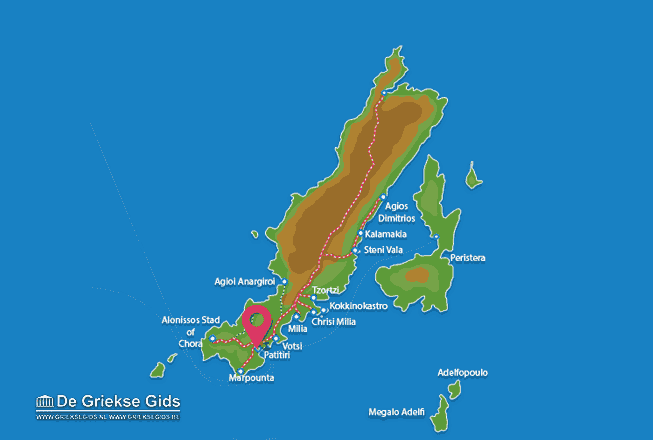 The map of Alonissos (©JustGreece.com)