Ancient Thira (Archaia Thira). Ancient Thira, on the Greek island of Santorini, is situated in the southeast of the island. Two routes can be used to reach Ancient Thira – through the village of Kamari or through the village Perissa on the other side of the mountain. Ancient Thira is an ancient city on a steep mountain (360 m high (1,200 ft) called Mesavouno.  It's quite a distance to walk to the top of Mesavouno. From Kamari there is a well-paved road to the top. The road has hairpin bends. There is a “train” that takes tourists to the top. You can also drive up by car, but we are not confident it is legal to do so. It is certainly a long walk to get to the entrance, but a pleasant one, with great views. Your reward: once you reach the top the view is superb and you can see the sea on both sides of the mountain. Look at views of the side of Kamari, and further away the airport, as well as the part of Perissa and the other beaches. In addition, the archaeological sites are absolutely worth viewing.

In Ancient Thira you can see the ruins of a city that was founded in the 8th century BC by Dorians from Sparta. Commander of the Dorians was the leader Tiras. This city had see enormous wealth for centuries, especially in the Roman period. On site are the remains of an ancient theatre, thermal baths, houses and tombs.

Ancient Thira in other languages


Santorini: Where on the map is Ancient Thira located? 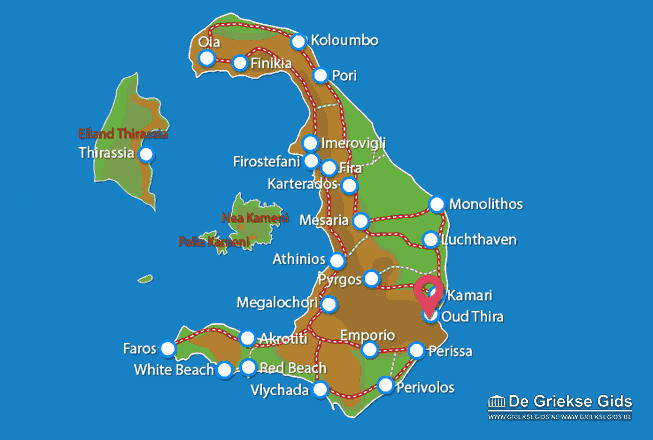