Methoni. Methoni is a historic town in the southwest of the department of Messinia in the Peloponnese, Greece. Here is located one of the most impressive Venetian castles from the medieval period. Methoni was an important trading centre in the Middle Ages, just like Koroni. In addition, it was an important stop on the route Venice and Jerusalem. Therefore it has always been the “apple of discord” in several power struggles at the time.

The castle was built in the 13th century on a peninsula. When you come from Koroni-Finikounda, you will see from very far away, the peninsula with the imposing castle. At the end of the peninsula, on the southernmost point, you can see the smaller Bourtzi castle, built on a rocky island. You can go and walk through the stone bridge.

The city was described already in ancient times by Homer. Then it was called Pedassos. It was one of the seven towns that were given to Achilles by Agamemnon to participate in the Trojan War.

Methoni is now a traditional village with a lot of white houses with red roofs and several straight streets, one of which is the shopping street. On the eastern side of the castle is a beautiful sandy beach where some nice taverns are.

Methoni in other languages


Messenia: Where on the map is Methoni located? 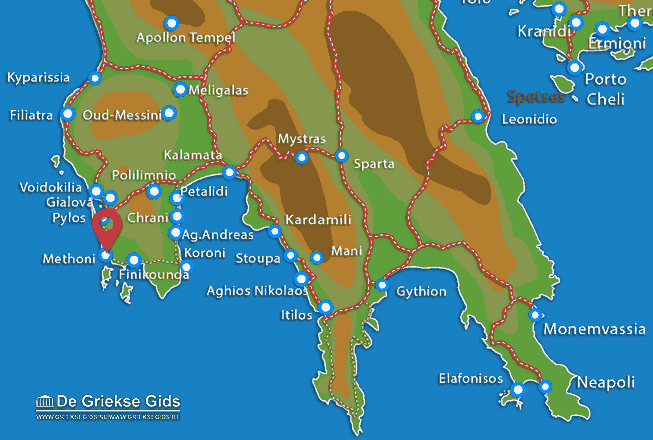