Voidokilia. Voidokilia is surrounded by a beautiful nature. It is located northwest of Gialova, on Lake Gialova in Messenia, Peloponnese, Greece. It is situated in a circular bay, which is surrounded by beautiful sand dunes and a lovely sandy beach where the sea is turquoise coloured. This bay is inhabited since the year 2000 BC.

You can get up to Voidokilia by car, there is ample parking. On the hill, a short walk from the beach, excavations can be seen from a tomb from the Mycenaean period. It would have been the grave of Thrasimidis, the son of Nestor, King of Pylos.

On the other side of the bay is a higher mountain. At the top of the mountain you can see the castle Paliokastro, also called the Old Navarino. This castle was built in the 13th century by the Venetians on the spot where the Mycenaean ancients had their town of Pylos. Below the castle is the cave of Nestor.

According to Greek mythology, the God Hermes was hiding a herd of animals in this cave, which he had stolen from the God Apollo. In these caves have been found objects dating from 7000 BC.


Messenia: Where on the map is Voidokilia located? 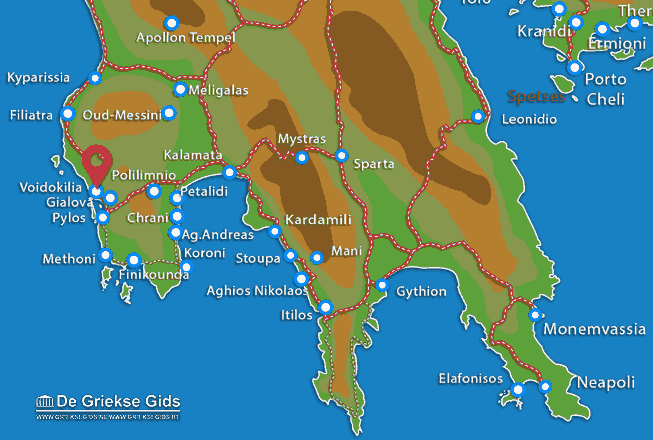