KALAMATA. Kalamata is the capital and main port of the department of Messinia in the Peloponnese in Greece. Kalamata is located on the Gulf of Messinia, it has beautiful beaches. The city of Kalamata is dominated by a 13th-century castle, built above it, by Geoffrey de Villehardouin. On the north side of the citadel is a small Byzantine church, dedicated to the Virgin of Kalomata (good eye; kalo = good and mati= eye) to who the city owes its name. From the castle you can admire the wide sea, with beautiful beaches and focus your eyes on the lush green land; the land of antiquity.

The city of Kalamata is the land of the "Kalamatianos" (a well-known Greek dance) and silks. World famous are the juicy black Kalamata olives and well known are the honey figs and the with sesame-covered sweet called "pastelli".

Kalamata is located west of Sparta and can be reached from here by bus, car and train. The city has an international airport and an important harbour. From kalamata you can go, by boat, to the island of Kythira.

Kalamata in other languages


Messenia: Where on the map is Kalamata located? 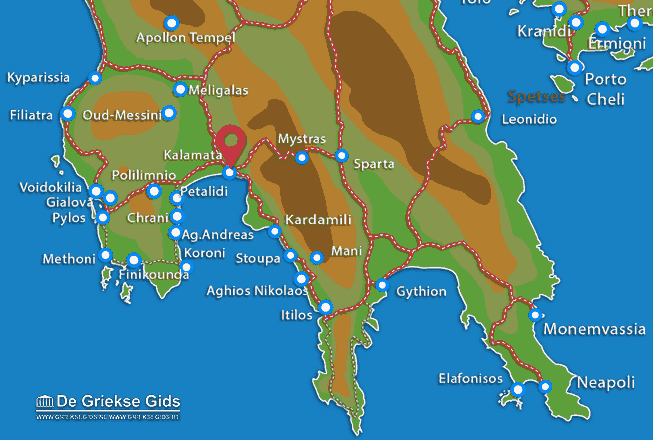