Agio Gala. Agio Gala literally means “Holy milk”. It is a traditional mountain village sixty kilometres north-west of Chios Town on the Greek island of Chios. It is located on a large, flat rock on the edge of steep slopes. Below the village is a cave called "Agiasma", it was inhabited in Neolithic and prehistoric times . The cave consists of three consecutive parts below each other.
In the caves are stalactites and stalagmites. At the entrance of the cave is the church of the Holy Mother Agiogalousena, which was built in the 13th century. In the church are beautiful paintings (icons) and iconostasis. A little further there are two smaller churches, the church of Agia Anna and the Church of Agios Thaleleos built in the year 1711.

There is a legend about this cave. During the Byzantine period a king banished his own daughter here because she had leprosy. In the cave she was cared for by a woman in black clothes. Three years later, the king regretted his decision and wanted to retrieve his daughter. When he arrived at the cave, he saw that his daughter was completely healed by the miracle water which seeped into the cave. The king then, gave order to build a church near the cave to thank God for the healing of his daughter. However, the builders encountered problems every day: all their materials were found every morning at the entrance of the cave. That happened a few days in a row. The King saw this as a sign from God and gave order to build the church at the entrance of the cave. The church originally was called Agios Galas. Later, the village above was also called Agios Galas, but originally the village was named Agios Thaleleos.

The village itself is situated in a beautiful area. According to archaeologists, the village has existed since the 6th century BC. The village is important because of the popular architecture. The houses held up by a single column and the structure is the most primitive for permanent residence. The unique home designs, the preservation of the local language and the occupations in agriculture by the residents makes the village very important for researchers.

Agio Gala in other languages


Chios: Where on the map is Agio Gala located? 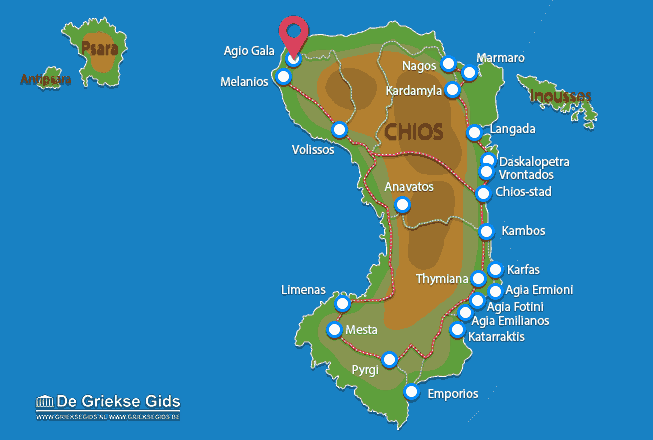