Kardamyla. The village of Kardamyla is one of the biggest villages of the Greek island of Chios. It is in the same place where the old Kardamyla was located, about twenty-five kilometres northwest of Chios Town. The village is located about eighty meters above sea level on the slopes of Mount Kranos.

Actually Kardamyla consists of two villages; the higher Ano Kardamyla and the seaside village, Kato Kardamyla, also called Marmaro. Nowadays "Kardamyla" is refering only to the upper village. Kardamyla is one of the oldest villages of Chios and is characterised by its traditional architecture, its stone houses and narrow streets with lots of arches and bridges. Many mansions that can be seen here are the houses of captains and sailors who come from here. In the 18th century many people lived in this village, it was the period of pirate attacks and the inhabitants of the villages below went for protection in the upper villages. This came to an abrupt end after the Catastrophe of 1822. (In the year 1822 the revolt of the Greeks was suppressed by the Ottomans.)

Ano Kardamyla is the older part of the village which lies at the foot of a steep hill, "Mount Grias". The village has a traditional architecture with narrow streets, alleys, cobblestones and an old town square with ancient plane trees that provide shade. A walk to Spilia, the abandoned settlement is recommended.

Kato Kardamyla now is called Marmaro. This village with a small port, is situated in a deep bay. Marmaro, means marble, the name has been given to the village because marble was produced here. Beautiful neoclassical buildings are also found here , many wealthy Greeks own a house here. In the village stands the statue of the Sailor from Kardamyla and the woman from Kardamyla who is waiting for the sailor. The statue of the Missing Sailor is by sculptor Apartis. Further noteworthy is the mill: Mylo tou Mavri.

On the square is located the church of Agios Loukas, built in the 17th century.

In Kardamyla and Marmaro now live about two thousand people.

Kardamyla in other languages


Chios: Where on the map is Kardamyla located? 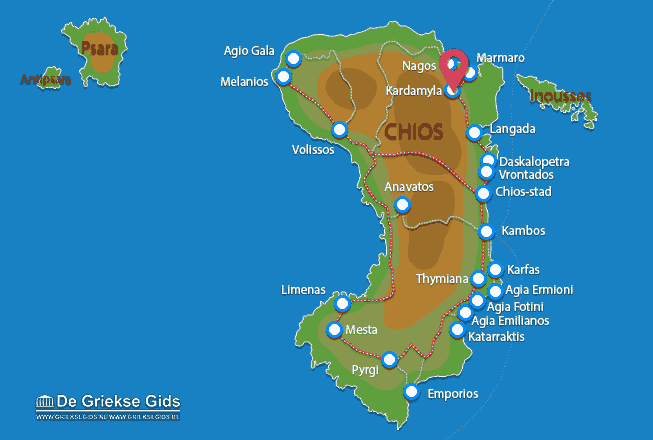