Anavatos is originally a Byzantine village, it is built on a high rock,  four hundred and fifty meters high, and is only accessible from the south. The village is surrounded by two gorges and consists of about four hundred buildings. The first villagers built the village below at the foot of the rock. Later, they "moved" up the village and called it Anavatos. The Greek word "Anavasi" means "Ascension". The villagers wanted to protect themselves from the pirates.

The most notable buildings are the church of Taxiarchis and the church dedicated to the Holy Mother. Most houses consisted of two floors: the first floor was a warehouse and the second floor was inhabited. These two areas were connected with each other along the inside. Unfortunately the houses and alleyways are ruined. With a little imagination however, you can imagine that the village has been important in the past and, given the size, many people lived here. The catastrophe of 1822 by the Turks and also after the big earthquake in the late 19th century led to the total abandonment of the village. When you see the village today it seems  like a ghost town. Yet a walk through the alleys of the village is a must.

Anavatos in other languages


Chios: Where on the map is Anavatos located? 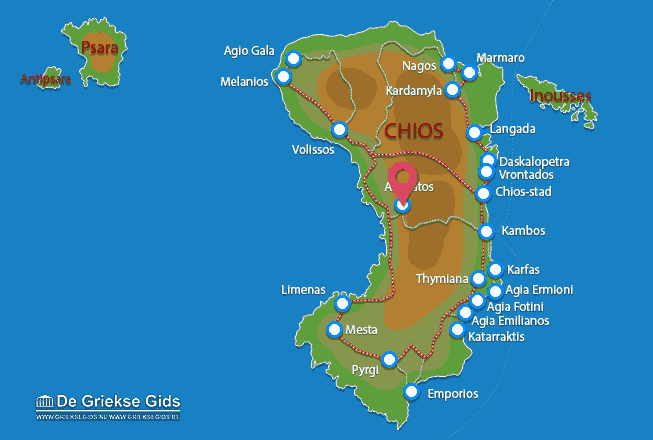