ARKASA (Arkassa). Arkasa is located on the coast in the southwest of the Greek island of Karpathos. The name of the village comes from the ancient city of Arkesia. This ancient city was on the rock hill Palaiokastro and nowadays the remains of its ancient Acropolis can still to be seen. Arkasa is located 16 kilometers (10 mi) southwest of Karpathos town (aka Pigadia) and is accessible via the village of Menetes.

Interesting sights of Arkasa are the remains of the Byzantine temple of Agia Anastasia, dating from the 5th century. The floor is beautifully decorated with mosaics. A large section of this mosaic floor is on display in the museum of Rhodes. An archaeological museum and a church are also located in Arkasa. Other attractions include the monasteries of Ipapandi and Agia Sofia.

When you're in Arkasa you can go to the top of the hill Paleiokastro. From the top the view to the sea and the area around Arkasa is spectacular. Arkasa is especially known for its wonderful beaches; the beaches of Aghios Nikoalos and Marmara.

The beach of Aghios Nikoalos is a well-maintained sandy beach that lies only 500 meters (less than 1/3 of a mile) from the center of Arkasa. On the beach you’ll find a restaurant, a snack bar (kiosk), umbrellas for hire and a beach volleyball field. It’s a white sand beach with clear water. The water here is shallow and suitable for children. At a far distance off the beach you’ll see large waves, reminiscent of Hawaii, but they disperse before they reach the beach.

Marmara is the second beach of Arkasa and it is on the other side of Kastro opposite the beach of Aghios Nikolaos. Marmara is accessible by the road that leads to the ancient Acropolis. In Marmara you’ll actually find two beaches, a sandy beach and a pebble beach.

Arkasa in other languages


Karpathos: Where on the map is Arkasa located? 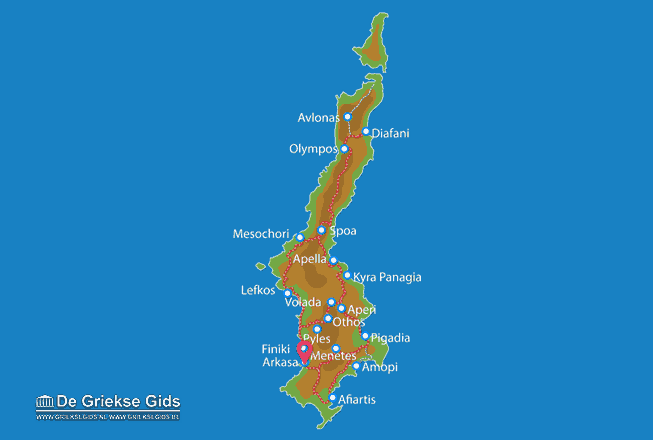 The map of Karpathos (©JustGreece.com)