KASTRO. Kastro, on the Greek island of Skiathos, was in the Middle Ages, the capital of the island. In Kastro one can see the ruins of a castle of the Middle Ages. It was built in the 14th century. The inhabitants of the island moved here to escape from the pirates that ravaged the island.

Kastro, meaning castle, was built on a rock, in the north of Skiathos. Kastro is reachable by car from Skiathos town within twenty-five minutes. The first part of the road is good, but then follows dirt roads and in some places fewer paved roads. The parking area is a few hundred meters from Kastro, the last part, about five hundred meters, you must travel on foot. This walk is more than worth it, the environment here is enchanting. The main part of the path is paved with stones and is easily accessible. The last part is a bit trickier. Through a stone staircase you finally climb the grounds of the castle, it used to be a wooden staircase. In Kastro three hundred houses and about thirty churches formerly stood on site. Nowadays there are three churches: the church of Jesus Christ, the church of Agia Marina and the church of Agios Nikolaos.

The castle was only abandoned in 1830, after the Greeks had revolted against the Turks. At  the highest point of the tower the Greek flag is flying. Cannons can be found here, that were formerly used by the Greeks.

Near Kastro is a beverage kiosk and at the beach, which is two hundred meters further, there is a cafeteria. Daily tourist boats come here to let their guests swim in the crystal clear waters at this beach.


Skiathos: Where on the map is Kastro located? 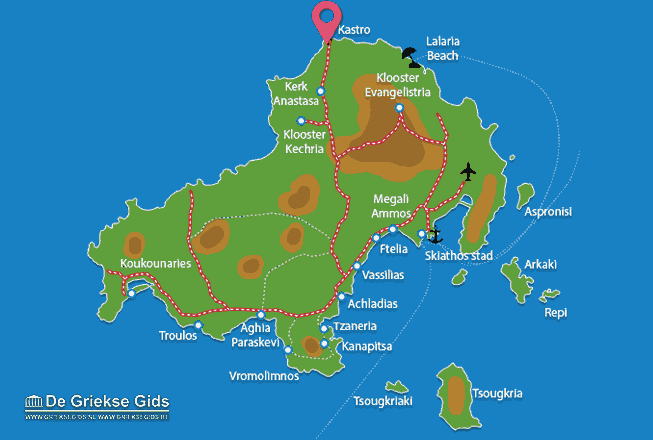