MONASTERY Evangelistria. The monastery of Evangelistria is in the mountains, about six kilometers north of Skiathos town. The monastery was built in the year 1794 by the monks Nifon and Chatzistamatis. It has played a great significance in Greek history, because here the first Greek flag was created. This happened in the year 1807, it is the blue flag with the white cross in the middle. It was the period when the Greeks were preparing to revolt against the Turks. Here,the Greek commanders Theodoros Kolokotronis and Andreas Miaoulis took the oath to fight for Greece until death. Within the walls and the grounds of the monastery are the church Evangelistria, Agios Ioannis and Agios Dimitrios. Very interesting is the well-kept museum in the monastery where costumes, documents, weapons and other items are exhibited. There is also a shop where among others things, homemade wine, liqueurs, honey, spirits, olive oil, herbs, icons, books are sold. In the store, which also has a museum function, objects are also displayed which farmers and monks formerly used in rural life to provide for their livelihood. For example, an old mill and equipment for distilling spirits like Tsipouro. Every year there is a big party on August 15 at the monastery, there are thousands of believers at the party . Then there is a procession and the icon of the Holy Mother worn around the monastery.

Monastery of Evangelistria in other languages


Skiathos: Where on the map is Monastery of Evangelistria located? 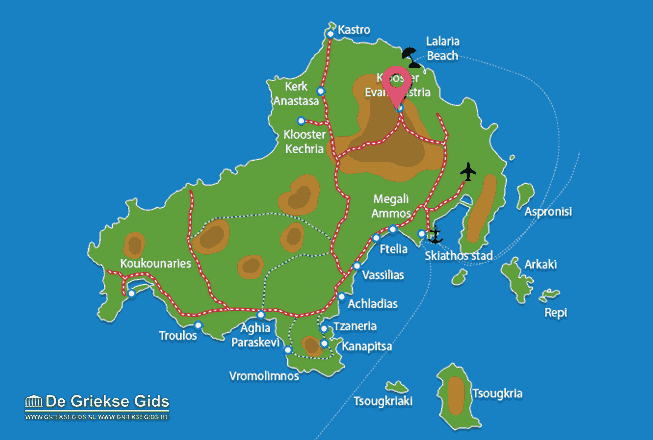