Lefkada (Lefkas). Lefkada owes its name to the white beaches and the white cliffs at Cape Lefkatas. The island has one of the best road networks of the Greek islands and has a well-managed port, ideal for yachting, and with facilities for tourist boat traffic.

You can reach the island of Lefkada by car through a bridge that connects the island to the mainland (free) and the prefecture Central Greece.

Blue flags on the beaches of Lefkada indicate that the sea water is perfectly clean. The sea is perfect for all kind of water sports.

On Lefkada you will find two of the best surfing beaches of the Mediterranean: Vassiliki, with its very special air flows and the Agios Giannis village, near the town of Lefkada.  Sailors really  love Lefkada.

Beside all kinds of water sports, there are a lot of opportunities for cycling, boxing, basketball and tennis. The flying club of Lefkada organizes competitions for model glider flying.

Via Lefkada town, in the north of the island, there are several places accessible by car, bus or moped.

Great holiday resorts on Lefkada are Nidri, Poros, Syvota and Vasiliki. Lefkada has some very fun tourist towns, some a bit bigger, others smaller. Nidri is the busiest and most popular place on the island.

Lefkada beaches and some tips

Visit the beaches Kathisma, Egremni and Porto Katsiki, three of the best beaches in the Meditterenean sea. Around the town are the beaches of Gyra and Agios Giannis, with characteristic windmills and the three forts that characterize the island. On the east side of the island are picturesque coastal villages such as Kariotes with salt fields, Lygia, a center for fishing and many cozy fish taverns, Nikiana with the nearby monasteries Agion Pateron and Agiou Georgiou and Nidri, the most famous resort on Lefkada.

Because of their long history, the residents of Lefkada are blessed with rich culture as artists. Carving and painting have always been widely practiced on the island. Since 1830, theater and choral performances have been given on Lefkada. The island has a long tradition of music and culture.

The tour of the island starts in the town of Lefkada, which is the administrative, economic, cultural and trade center of the region. Here is a bridge that connects Lefkada with the rest of Greece. The historic center of this city has traditional houses, streets that are paved with cobblestones and a central square.  In the town, there are several museums.

In the interior there is the traditional village of Karya and there are many other small villages immersed in beautiful greenery like the ancient village Alatro with its 38 churches.

The history of Lefkada

Archaeological research has shown that the first life on Lefkada dates back to the Neolithic period, in the middle of the fourth millennium BC.

According to Aristotle, the Lelegen were the first inhabitants. Archaeological finds from the Achaic and the Minoan period are ancient witnesses of a lost era.

After the Achaeans, the Dorians settled the town of Nirikos. Lefkada took part in the naval battle of Salamina and the Peloponnesian War.

In 338 BC the island was occupied by Philip the Second, father of Alexander the Great, and in 31 BC it took part in the battle for Aktion.

In Byzantine times, the island was a dowry given by the bishop Nikiforos First to Count Orsini, who built the castle of Agia Mavra. Then, followed a 180 year long rule by the Venetians.

In 1797, Napoleon Bonaparte beat the Venetians and Lefkada fell into the hands of the French and, in 1810, came under British rule. In 1815, at the Treaty of Paris, all the Ionian islands were proclaimed an independent state, "United State of the Ionian Islands," at the governor level of Great Britain.

In 1864, Lefkada, along with the other Ionian Islands, swsas united with motherland Greece.

Lefkada in other languages


Lefkada: Where on the map is Lefkada located? 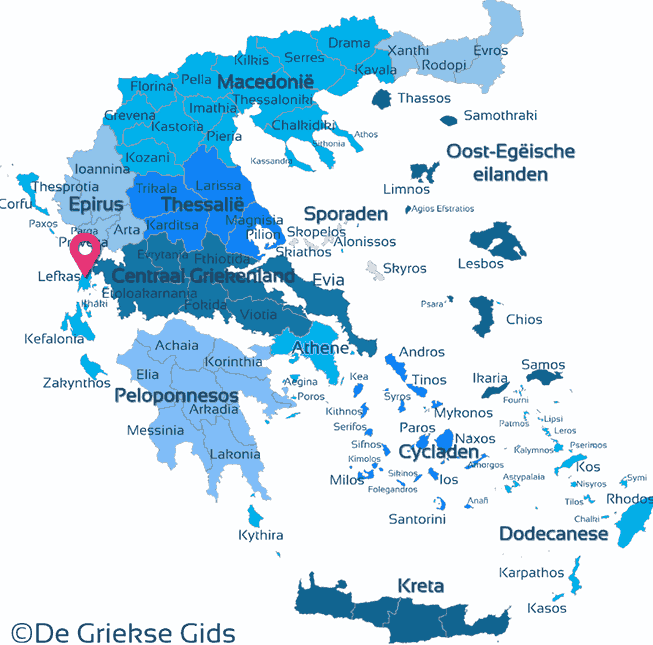 The map of Lefkada - ©JustGreece.com