Meganisi. The word ‘Meganisi’ is derived from the Greek words Mega (=large) and Nisi (=island). Is Meganisi a big island? The answer is no. Meganisi is a 20 km2 large island southeast of Lefkada, it is the largest of the islands that lie between Lefkada and the Greek mainland (Prefecture Aetoloakarnania). On Meganisi there are three villages: Katomeri (traditional village in the east), Vathy (fishing village in a deep bay, very popular among sailors) and Spartochori (traditional hill village with narrow streets and traditional cottages). On the island live 1000 permanent residents.

Meganisi is a very green, mountainous island. The highest peak is 301 meters. The north of the island has less steep mountains, here are all the beaches of Meganisi. One of the most famous sights on the island is the cave of Papanikolis. This cave was in World War II, the shelter of a submarine which played a major role in the resistance against the Germans.

Meganisi (island) in other languages


Lefkada: Where on the map is Meganisi (island) located? 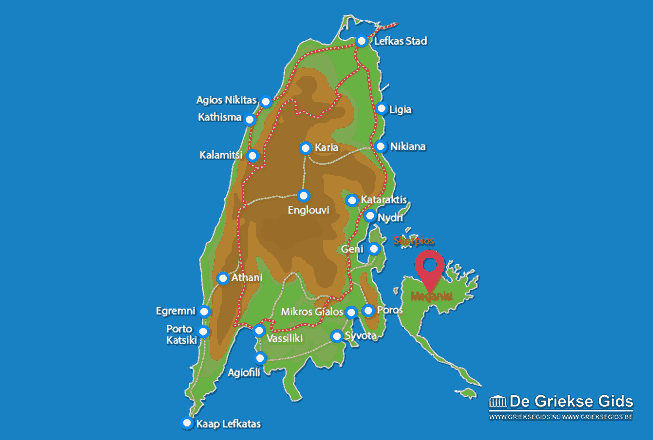