Skorpios. Skorpios is one of the most famous private islands in the world. We made a boat trip to the island and we were impressed. The tragic story of the Onassis family was told to us and we got the opportunity to swim at the 'Maria Callas' beach. Aristotelis Onassis was a wealthy Greek ship-owner. He married in 1946 with Mary Athina Livanos, with whom he had two children: Alexander and Christina.

In 1957 he founded the Greek state airline Olympic Airways. The company came to greater prosperity when Onassis built the first super tankers. In the fifties, Onassis began an affair with opera superstar Maria Callas, although both were still married to someone else. The relationship held for many years, but it never came to a marriage. Onassis and his wife divorced in 1960, in 1959 Callas was already separated. However, in 1968 Onassis married Jacqueline Bouvier Kennedy, the widow of John F. Kennedy. Onassis died at the age of 69. His son Alexander was killed in 1973 in a helicopter crash, daughter Christina inherited his entire fortune. Christina Onassis was married four times. Her only child, Athina is the heiress of the Onassis fortune. Christina Onassis died at the age of 37. Athina is the only granddaughter and heiress of Aristotle Onassis, one of the richest people on earth. Athina was in 2003 on her eighteenth birthday given access to the legacy of her grandfather. This legacy consisted of 2.45 billion euros in real estate, businesses, stocks, art, and a private plane.

It's been a long time since Athina visited her private island. There were rumours that Bill Gates was interested in the island and Giorgio Armani, but these rumours were never confirmed. In april 2013 the island finally was sold to Ekaterina Rybolovleva, the daughter of a Russian billionaire.

Skorpios (island) in other languages


Lefkada: Where on the map is Skorpios (island) located? 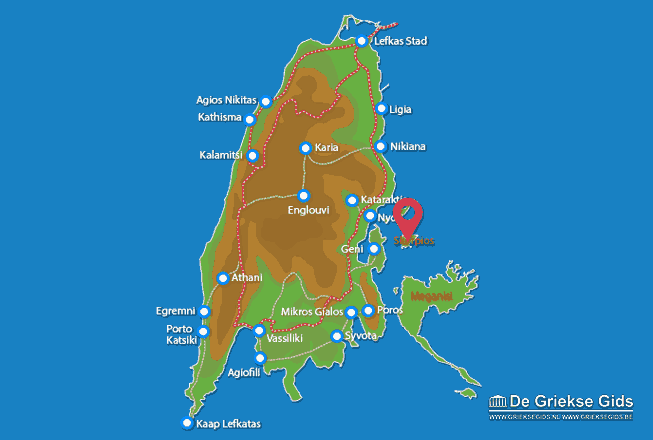