Egremni. Egremni is one of the many beautiful beaches in Lefkada. Egremni is one of those beaches you often see on calendars, it is so beautiful here. The beach of Egremni is located in the southwest of the island in a secluded place and since the year 2016 is only accessible by boat. An earthquake that occurred in November 2015, ruined the 350 steps you had to take to descend to the beach, so now you are only able to reach here by boat from Nidri and Vassiliki. In July 2016 we tried to do the old route by car and wanted to go to the former parking via Athani, but the road is now closed. We wanted to see the breath-taking views of the beach again and see the steep cliffs that stand out on the golden beach and the turquoise colour of the sea. Unfortunately, it's too dangerous. Luckily we had our drone and we were able to create beautiful images again of this fantastic beach.

A couple of days later we visited the beach of Egremni by boat to swim there, we really enjoyed this beautiful area! Despite the earthquake in November 17, 2015, when rocks and sand fell down on some parts of the beach, it is still fantastic here and definitely worth visiting!

Egremni in other languages


Lefkada: Where on the map is Egremni located? 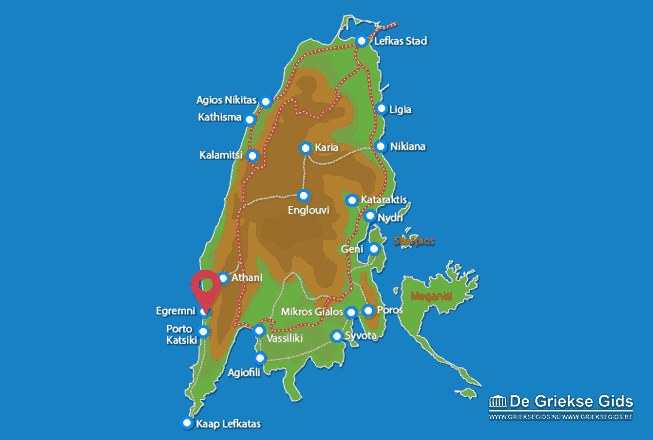