Christos Raches. The village Christos in the mountainous  area of Raches, is by far the most popular mountain village on the Greek island of Ikaria. It is located about 400 meters high on a hill with pine trees, olive trees and sycamores. The village is known in Greece as "the village where time is not a factor." You can go to a shop, restaurants and a café 24 hours a day, it is always open! Strange don’t you think?

The heart of the village is the village square. Here are bars, cafes, traditional restaurants and shops. You can sit nicely here and order traditional "mezedes" (= Greek appetizers) and don’t forget to order a tasty ouzo or wine. In summer festivals are held regularly, these sometimes last two or three days. At the village square it is always fun. Here is also the church of the village. The biggest party will be held on August 6th  in honour of Jesus Christ.

Christos is also during winter a lively village, there is even a high school.

Christos Raches in other languages


Ikaria: Where on the map is Christos Raches located? 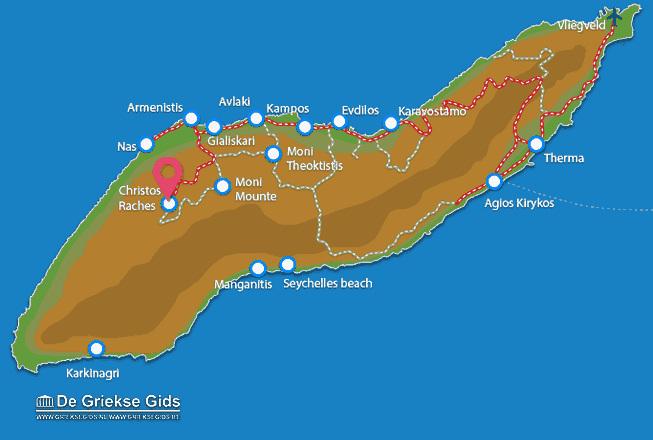