Kampos. Kampos is centrally located on the north coast of the Greek island of Ikaria, in between Avlaki and Evdilos. Kampos means meadow. If you're standing on the hills near Kampos, you will see a small, fertile plain with behind it a beautiful white sandy beach.

Kampos does not actually have a real village centre, on the plain to the sea are a few houses scattered here and there. On the beach are beach chairs and umbrellas and there is a snack-bar and cafeteria. Behind the beach a few lakes are formed, which is due to the water flowing from the mountains.

Here in Kampos is located the ancient Inoi. This area was inhabited from the Mycenaean period to post-Roman times. Inoi was in ancient times Ikaria's capital.

In Kampos rooms and hotels are available. From here, you are very near to the port of Evdilos and near the beautiful green mountains, where for example Moni Theoktistis is located, one of the most popular attractions of the island.

Kampos in other languages


Ikaria: Where on the map is Kampos located? 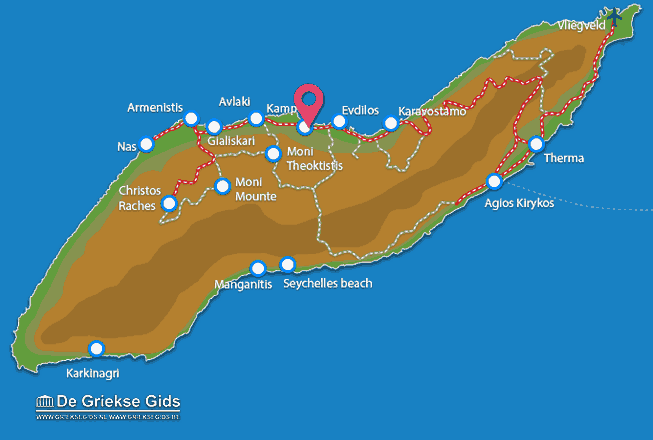