It is located in a truly magical setting in the green mountains of Ikaria. The monastery would be founded in the 15th century by the monk Meletios who got help from his mother and his brother. On the grounds of the monastery is the white church of Theoktisti with its striking tower. The roof of the church is covered with grey stones. Around the church you can see beautiful flowers everywhere, it seems a paradise!

When you enter the church, you can see the ceiling is beautiful, with ancient murals of saints and Jesus Christ. This could have been the work of the painter Chatzis Pantelis Anagnostou in the year 1688. The iconostasis in the church should be the work of Greek refugees from Smyrni (Izmir Turkey) who had come to live here, around the year 1910.

If you walk a little further, you come to the striking chapel, one of the most photographed sights of Ikaria. The chapel is located between two large rocks and is 'packaged' as a sandwich. Through a narrow passage you can walk inside.

Moni Theoktistis in other languages


Ikaria: Where on the map is Moni Theoktistis located? 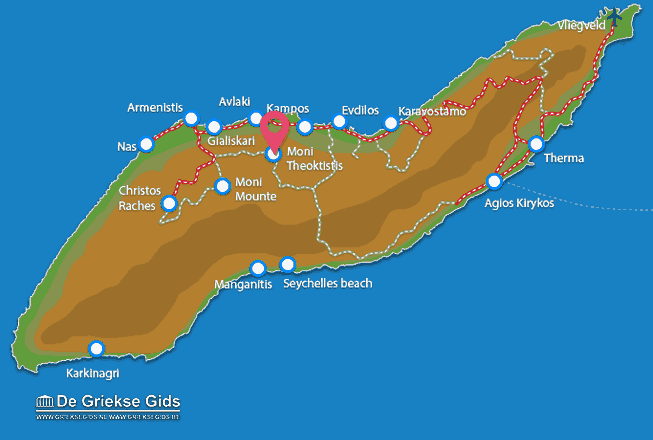