Nas Ikaria. One of the most beautiful places of Ikaria is Nas, which lies three kilometers west of Armenistis. Here is located the beautiful small beach of Nas. At this point the river Chalaris flows to and also ends here the gap of Chalaris. This river flows through the Chalaris Gorge which lies just behind here. The nature here is very beautiful and behind the beach a beautiful green lake is formed.

In Nas you can see the ruins of the Sanctuary of  Goddess Tavropoulou Artemis that was very popular at Ikaria in ancient times until the Roman era. Here was the ancient port, unfortunately, nowadays there remains little of it.

Nas is a tourist village in the sense that there are several restaurants and tavernas. There are also rooms and hotels where you can stay as a guest.

To reach the beach you have to walk through the slopes of the mountain and hike down. You can park the car at the top by the tavernas. A walk lasts only 5 minutes, but beware, you have to be agile.

Nas in other languages


Ikaria: Where on the map is Nas located? 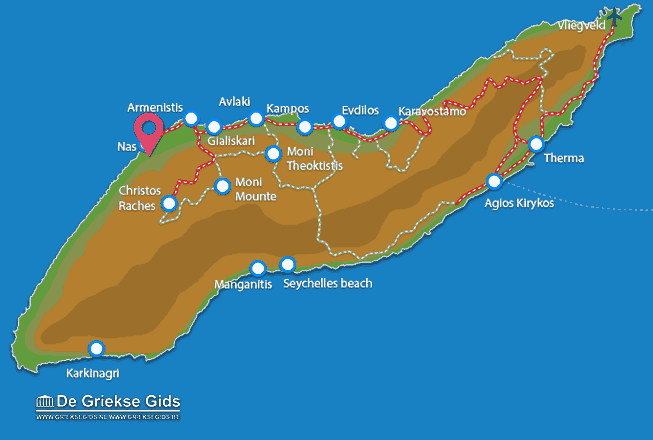