Mytilene or Mitilini. Mytilini is the capital of the Greek island of Lesbos, but also one of the oldest cities in Greece, with a history that began in the year 3000 BC. The city owes its name to one of the daughters of Makaras, the mythological king of the island. The town was merged with the picturesque surrounding communities Loutra, Taxiarchis, Panagiouda, Moria, Alifada, Pamfila and Agia Marina and the area is covered with olive trees, Mytilini exudes a quaint beauty, and the city offers a wonderful view over the sea.

The city is adorned by a Byzantine fortress. The castle is also a lively place in the city because interesting cultural events take place here during summer months. This castle is located north of the harbour. Metropolitan churches from the 17th century give Mytilini also a nice appearance, the dome you'll notice upon arrival at the port; the Agios Therapon church with its impressive architecture and the church of the miraculous Taxiarchis in the same part of town. Mytilini offers unique museums and attractions such as the two archaeological museums, the Theofilos Museum and the Museum of Modern Art Teriad, the ancient theatre, the Roman Aqueduct, the mansions which are unique examples of architectural art, the statue of liberty etc. Mytilini is a very vibrant city with a great nightlife.

There are old-fashioned eateries and ouzeries and the prices are more than affordable. At the harbour there are also many hotels overlooking the sea. One of the most popular beaches of the city, with a lot of entertainment in the summer, is Tsamakia beach. This is located at the foot of the castle. It is also worth enjoying a hot bath in the thermal baths of Thermi, which lies eight kilometers from the capital. In the many picturesque fishing villages you can sample delicious local "mezedes" (appetisers) try with the smell and taste of local olive oil and always accompanied by a glass of world famous ouzo Mytilinis.

Mytilini in other languages


Lesbos: Where on the map is Mytilini located? 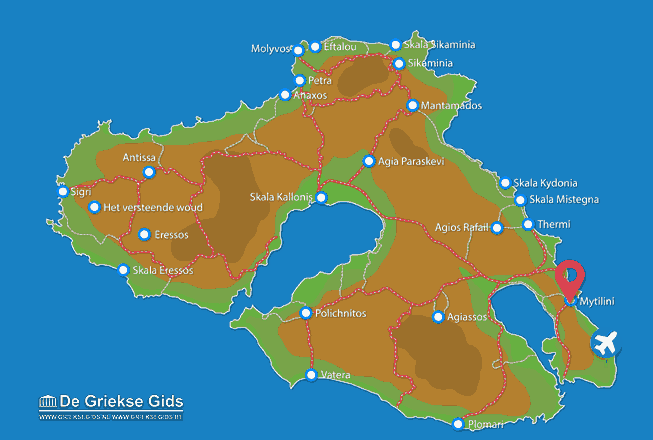