Lindos Rhodes. Lindos is a picturesque village with white houses on the Greek island of Rhodes. It is located about 50 kilometers (30 mi) south of Rhodes town. The village of Lindos is a maze of cobblestone streets. The white houses are splendid. In ancient times it was one of the three main cities of Rhodes, along with Ialyssos and Kamiros. Lindos was famous and in ancient times was an important city due to its favorable location and natural harbors that surround it. Lindos was a commercial city where many ships moored.

The main attraction at Lindos is its Acropolis, which symbolizes the meeting of cultures in ancient times. On a large triangular rock of 116 meters high, is the Lindos Castle. This can be easily reached on foot if you are an able walker. As a unique and special treat you can also ride on a donkey upwards or downwards. Along the route to the castle are women selling handicrafts (especially tablecloths). Four different levels exhibit several historical sites. On the first level there are three underground reservoirs from the Byzantine period and on a rock, you will see a depiction of a ship. Follow the stone steps and you come to the 2nd level with the castle of the Knights of St. John. On the third level is the Stoa of the Hellenistic period and on the upper plateau the Temple of Athina Lindia.

In Lindos you’ll see many traditional captain houses from the 16th, 17th and 18th centuries. These houses have been restored and are one of the popular attractions of Lindos. On the outside of these houses is written the date on which they ​​were built and some of these houses are rented as apartments, others are now shops, restaurants and cafeterias.

Lindos in other languages


Rhodes: Where on the map is Lindos located? 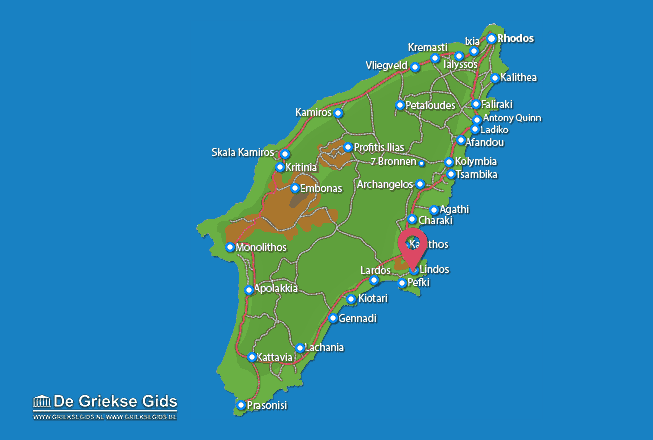