Tsambika Beach Rhodes. According to many people, Tsambika is the most beautiful beach of the Greek island of Rhodes. It lies on the east coast of the island, 26 kilometers (16 mi) from Rhodes town. It is a wide, long, sandy dune-like beach, surrounded by magnificent lush covered hills. The beach has been given the name of the Holy Mother Tsambika. In the region are in fact two monasteries that are dedicated to the Holy Mother Mary. In Rhodes one refers to the Holy Mother as Tsambika.

On the beach are a dozen beach pavilions that are very trendy and are visited by thousands of sunbathers every day in the summer months. Regularly, public buses arrive and depart from the beach. If you prefer to come by car, there is ample parking behind the beach.

The best views of the beach are from the old monastery, which is to the left of the beach, perched on the top of the mountain. Here, the old Tsambika monastery is built atop the ruins of an ancient temple of Artemis. It's more than worth the effort to walk to the top. Coming from Rhodes town and a few hundred meters before the exit to Tsambika, there is a sign indicating, "Monastery Tsambika.” Take that exit and drive up the mountain to the restaurant which is on the slopes of the mountain. From there you it’s still about 300 steps to the top. The environment here is great, but the view is so incredibly spectacular that you will not regret the effort!

Tsambika in other languages


Rhodes: Where on the map is Tsambika located? 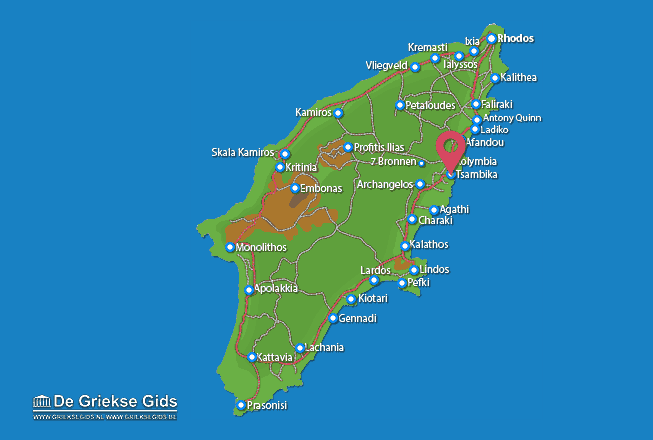