Loutra. Loutra is a small, traditional village in the prefecture of Rethymnon on the island of Crete. It is located about four kilometres from the bay of Rethymnon and near the beach of Pigianos Kampos. The town of Rethymnon is located about eight kilometres from Loutra. Loutra is a medieval village. It is easy to find, as it is on the route Pigi to Arkadi. Loutra is surrounded by olive groves. Loutra has Venetian influences which can be seen on the construction of some houses. You also see the characteristic typical Cretan stone houses and narrow stone-paved alleys. Loutra means 'baths', this name comes from the 'baths' who used to be here in the 16th century. Unfortunately, these are no more. In the village there are some minimarkets and a bakery. Notable are the many churches. Just outside the village is the church of Agios Panteleimnon with a monument in memory of the villagers who were executed during the 2nd World War by Nazi Germans. The most well-known person in the history of Loutra is Ilias Spantidakis, who was born here in 1886 and was known in America as Louis Tikas. He was the main trade union organiser at Ludlow camp in Colorado America during 1913-1914. He defended the miners and their rights. He was killed on April 20th 1914 during one of the bloodiest strikes by a militia founded by the owners of the mines.

Loutra in other languages


Rethymno Prefecture: Where on the map is Loutra located? 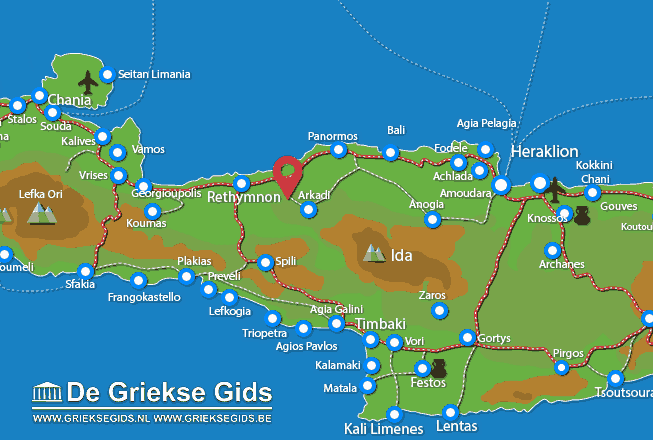